[“Free association” wasn’t the original title of this morning’s post. But after you read it, you’ll see why I changed it. I know, I need to get out more.]

Quick — can you name all four Marx brothers? (Actually, there were five: Gummo was part of their vaudeville act, but didn’t make the movies with them.) Don’t look it up, just name them, sitting right there at your machine. Or you could just cheat.

How about all seven dwarfs? The four oceans? The Great Lakes? The Seven Wonders of the Ancient World?

My point is, you always miss one. Groucho, Harpo, Chico and ….. dangit.

You can always come up with a mnemonic device. I did that a lot just recently, trying to remember taxonomies and citations and all that happy crappy. 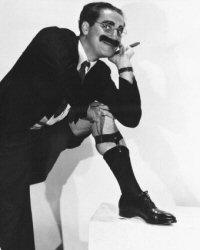 This morning, I came across a 1946 letter Groucho Marx wrote to the Warner Bros. movie studio (which produced the blockbuster drama, Casablanca), after Marx was threatened with litigation if he didn’t change the name of the new Marx Brothers movie, A Night in Casablanca, to something else.

Here — in its entirety because it’s so totally Groucho and funny and irresistibly snarky — is Groucho’s response. From the copyright website, Chilling Effects:

Apparently there is more than one way of conquering a city and holding it as your own. For example, up to the time that we contemplated making this picture, I had no idea that the city of Casablanca belonged exclusively to Warner Brothers. However, it was only a few days after our announcement appeared that we received your long, ominous legal document warning us not to use the name Casablanca.

It seems that in 1471, Ferdinand Balboa Warner, your great-great-grandfather, while looking for a shortcut to the city of Burbank, had stumbled on the shores of Africa and, raising his alpenstock (which he later turned in for a hundred shares of common), named it Casablanca.

I just don’t understand your attitude. Even if you plan on releasing your picture, I am sure that the average movie fan could learn in time to distinguish between Ingrid Bergman and Harpo. I don’t know whether I could, but I certainly would like to try.

You claim that you own Casablanca and that no one else can use that name without permission. What about “Warner Brothers”? Do you own that too? You probably have the right to use the name Warner, but what about the name Brothers? Professionally, we were brothers long before you were. We were touring the sticks as the Marx Brothers when Vitaphone was still a gleam in the inventor’s eye, and even before there had been other brothers—the Smith Brothers; the Brothers Karamazov; Dan Brothers, an outfielder with Detroit; and “Brother, Can You Spare a Dime?” (This was originally “Brothers, Can You Spare a Dime?” but this was spreading a dime pretty thin, so they threw out one brother, gave all the money to the other one, and whittled it down to “Brother, Can You Spare a Dime?”)

Now Jack, how about you? Do you maintain that yours is an original name? Well it’s not. It was used long before you were born. Offhand, I can think of two Jacks—Jack of “Jack and the Beanstalk,” and Jack the Ripper, who cut quite a figure in his day.

As for you, Harry, you probably sign your checks sure in the belief that you are the first Harry of all time and that all other Harrys are impostors. I can think of two Harrys that preceded you. There was Lighthouse Harry of Revolutionary fame and a Harry Appelbaum who lived on the corner of 93rd Street and Lexington Avenue. Unfortunately, Appelbaum wasn’t too well-known. The last I heard of him, he was selling neckties at Weber and Heilbroner.

Now about the Burbank studio. I believe this is what you brothers call your place. Old man Burbank is gone. Perhaps you remember him. He was a great man in a garden. His wife often said Luther had ten green thumbs. What a witty woman she must have been! Burbank was the wizard who crossed all those fruits and vegetables until he had the poor plants in such confused and jittery condition that they could never decide whether to enter the dining room on the meat platter or the dessert dish.

This is pure conjecture, of course, but who knows—perhaps Burbank’s survivors aren’t too happy with the fact that a plant that grinds out pictures on a quota settled in their town, appropriated Burbank’s name and uses it as a front for their films. It is even possible that the Burbank family is prouder of the potato produced by the old man than they are of the fact that your studio emerged “Casablanca” or even “Gold Diggers of 1931.”

This all seems to add up to a pretty bitter tirade, but I assure you it’s not meant to. I love Warners. Some of my best friends are Warner Brothers. It is even possible that I am doing you an injustice and that you, yourselves, know nothing about this dog-in-the-Wanger attitude. It wouldn’t surprise me at all to discover that the heads of your legal department are unaware of this absurd dispute, for I am acquainted with many of them and they are fine fellows with curly black hair, double-breasted suits and a love of their fellow man that out-Saroyans Saroyan.

I have a hunch that his attempt to prevent us from using the title is the brainchild of some ferret-faced shyster, serving a brief apprenticeship in your legal department. I know the type well—hot out of law school, hungry for success, and too ambitious to follow the natural laws of promotion. This bar sinister probably needled your attorneys, most of whom are fine fellows with curly black hair, double-breasted suits, etc., into attempting to enjoin us. Well, he won’t get away with it! We’ll fight him to the highest court! No pasty-faced legal adventurer is going to cause bad blood between the Warners and the Marxes. We are all brothers under the skin, and we’ll remain friends till the last reel of “A Night in Casablanca” goes tumbling over the spool.

Heh. Someday, I’ma write like that. Anyway, the end of the story:

Unamused, Warner Bros. requested that the Marx Brothers at least outline the premise of their film. Groucho responded with an utterly ridiculous storyline, and, sure enough, received another stern letter requesting clarification. He obliged and went on to describe a plot even more preposterous than the first, claiming that he, Groucho, would be playing “Bordello, the sweetheart of Humphrey Bogart.” No doubt exasperated, Warner Bros. did not respond. A Night in Casablanca was released in 1946.