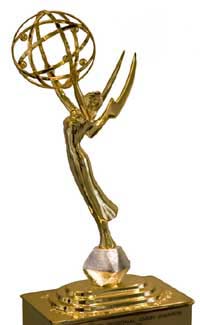 So the Emmy nominations came out yesterday, and I don’t want to brag, but I must say I was gratified to see that the Academy of Television Arts and Sciences agreed with me, at least 83% of the time. Behold the nominees:

Also, 16 of the 24 acting nominations in the drama category are from the five checked shows above. That’s pretty snappy, I’ll tell ya. Go Joan Holloway, go Jesse Pinkman.

I’ll also mention the miniseries category, which includes nominations for “Hatfields & McCoys,” “American Horror Story,” and “Game Change,” all of which I have seen and enjoyed.

Why did I not list any comedy series today? Because I don’t watch sitcoms. Why? Because…I don’t know. Please don’t think me a humorless numpty; I just clammah for the drammah.

Banner year for Finkertainment, that’s what I say.

All right, fiends. Time to do some serious bill paying. Happy payday!