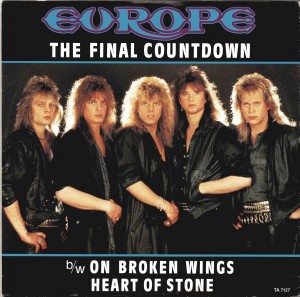 It’s the final countdowwwwwwwwn. That was a good song. Ah, memories of drum machine beats and mall hair…

A week from tomorrow, we begin what could be our final Odyssey, since the Thriller is now done with seminary (yay!) and we likely won’t be able to take such large chunks of time to break away from here on out. (We’ll actually save money for home improvement chores that have laid abandoned for the last four years as well, heh.)

Our weekend and Monday were spent in various stages of work and play. It’s very much like me to put off the initial packing ceremonies until the last 24 hours before leaving, but I need to be more disciplined this year. Since we’ll be in Mississippi, Texas and Oklahoma, followed by Montana, Idaho and Washington, we’ll need to dress for two different seasons — maybe three. I’m devoting an entire suitcase to our sweats, sweatshirts and jeans.

This is where I ask my fellow travelers how they make the best use of space. My main peeve is schlepping the entire universe into the hotel every night. How to consolidate? How to predict? It’s not a huge issue in the world scheme of things, but I do wonder how best to streamline. I’m not good at that at all. I struggle with compartmentalization, as many of you know.

But I have what — five or so days? — to procrastinate on that.

Today is filled up with other stuff, not the least of which is trying to get a quick viz in with all three grandsons. Those become more and more important as Go Time approaches.

Non sequitur: After seeing the successes of RtB fiends Suzanne and RD with their bikes, and talking with Seamus about it, I am considering trying biking again. (Bicycles and I generally do not get along, for a couple of reasons.) What should I get? Whatever it is, it will have to be of the 24-inch variety. Little feet have to be able to touch the ground.

Make sure you go to a good bike shop and get a bike that fits you. If they know what they are doing they should know what size and how high the seat should be and what kind of bike will be good for what you want etc etc etc. Exciting that it’s almost time for your trip!! I can offer no help on the suitcase thing, except to say to try and keep it to one. HAAAAA ReplyRat Fink Reply:June 5th, 2013 at 7:24 amAfter I read your comment, I researched bike saddles. I think I’ve found one that… Read more »

The thing I’ve noticed about travelers (and I’ve seen LOTS!) is that many take too much stuff with them. On a cruise a couple of years ago, a couple mentioned to me that there wasn’t enough storage space in their cabin. What did they have? Three good-sized closets, 5 drawers PLUS two under-the-bed slide out drawers. And all of them were filled and they were still using suitcases to store clothing. Rule of thumb: pack for the season but allow for “mix and match” items. When I was in Alaska, I packed some things in special “air bags” which allow… Read more »

Super that you’re considering bicycling!! I agree completely with what Suzanne said. Don’t buy a bike at Walmart, but instead at a reputable bike shop. The initial costs will be higher, but the satisfaction level with also be higher and over a longer haul. You’ll get much more personal service, such as fiting you with the proper bike. When traveling, we pack smaller overnight suit cases and that’s all we take into the motel. But we also pack a larger suitcase with additional things that we will probably need, but leave them in the car. Then about every third or… Read more »

I am no help at all to you with the packing thing. I tend to pack WAY too much stuff. I do try to pack so that I, I mean Bryan, can just haul one or two suitcases into our hotel for the night, not all of them. I can, however, assist you with the bike issue. We have always been happy with Excel Bike in Norwalk. The owner is Joe. Great guy. Great bikes. Check out his shop at http://excelbikenorwalk.com. ReplyRat Fink Reply:June 5th, 2013 at 2:15 pmHey, thanks for the recommendation, Wendell! I will definitely visit them when… Read more »