So I finally got to see The Dark Knight last night. Very good. Not the greatest for me personally, but very good and quite impressive for several reasons. 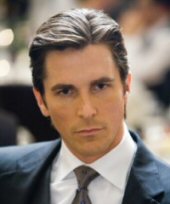 Of course, there was dreamy Christian Bale.

It was a big change for me since seeing him a couple of years ago in The Prestige, in which he was a bit heavier and decidedly unpretty. He was fun to watch in this as well.

I must say, however, the gravelly Batman voice grated on me. Really bad. I mean, every time I heard it I wanted to clear my throat or offer him a lozenge. Why did the director feel he had to change Bale’s voice as Batman? The movie is based on a comic book, fuh cripesake. How about a little suspension of disbelief? If we can accept the premise that an entire modern city can depend on a guy in a pointy-eared mask to save it from the bad guys, we can believe that there’s some mesmer quality in Batman’s voice that renders people unable to tell he’s really billionaire philanthropist Bruce Wayne.

Heath Ledger’s performance has been written about ad nauseam, and with good reason. With Nicholson’s Joker, you could laugh him off. He was evil, but in a funny, almost goofy way. You never let him get under your skin or make you feel more than a passing revulsion.

Not so with Ledger. If he doesn’t get the Oscar for BSA, I will be surprised.

No Robin in this film. I was happy.

I didn’t see the 24 mistakes in the film, either. Call me crazy. Or unobservant.

A truly impressive point was the American accents delivered by three of the leads. Bale (Welsh), Ledger (Australian) and Gary Oldman (British) were amazing. Oldman, I think, is an extremely underrated artist. I like his choice in roles; he’s played many varied characters, from Sid Vicious to Sirius Black to Dracula to Beethoven to that creepy guy in Hannibal. Kind of like Johnny Depp. And speaking of…

I read a rumor that Depp has been tapped to play the Riddler in the next Batman film. I hope it’s true.

Another observation, albeit a small one. The script always called for the article “the” before “Batman.” Bale’s character was referred to as “the batman” — maybe to give the supporting actors some distance from portraying characters who appeared as naïve, hero-worshiping sheep. 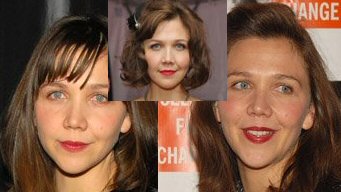 Ok, finally — and I’m ashamed to admit that it really, really bothered me, to the point of it being a definite distraction every time she was on screen — is Maggie Gyllenhaal, God love her. After gorgeous former Batman “girls” like Kim Basinger, Michelle Pfeiffer and Katie Holmes, poor Maggie…I don’t know. I’ll just say that I found the casting of the Rachel Dawes role completely and utterly baffling, and leave it at that.

Ok, time to get some work done.

ooooohhhh the dark night – 1.89 thumbs up for me!! Ledger was amazing wasn’t he!!? he played the part to perfection – at least in my opinion. AND holy pooo! i totally agree about the Maggie Gyllehaal thing! actually when i began reading i was wondering if u were going to bring her up. I definetly didn’t think she was right for the role. Exactly why? idk. Maybe not ‘beautiful’ or ‘feminine’ enough??? I can’t put my finger on it. But i had to watch this movie twice to get all of the details, especially to catch all of the… Read more »

I liked the voice for Batman being different. Nolan is going for a realistic gritty portrayal, not the campy previous versions where you suspended disbelief about loads of things. Bruce Wayne is a well known public figure in the city, it would be ridiculous for people not to recognize his voice unless it was well disguised. And if the man is putting on a whole bat costume and cape to prevent recognition and put fear in evil doers why wouldn’t he lower and gruff his voice for the same purpose? The Batman from the dark Frank Miller graphic novels the… Read more »

I hear you about the voice thing. I guess I didn’t mind the deeper voice as much as I minded its quality. At least make it smoother in the studio. To me, it sounded like he was simply battling laryngitis. I mean, if the point is to make it believable, let’s go all the way and do it right. But my opinion and $3…. Totally agree on the Maggie casting. And it really wasn’t all her fault — her makeup and wardrobe in some scenes was just horrible looking. Maybe that was a nod towards realism too…we all have our… Read more »

Maggie is a good actress and cute in a cult-film kind of way, but was totally miscast in this role, both in terms of being a Batman babe and as a hard ADA. I almost laughed when Joker called her beautiful in the party scene. Loved her in the movie Secretary though. She spanked that part and made it her own.

I actually enjoyed Nicholson’s Joker more because you couldn’t be sure he was joking or not until he squirted the acid in your face. With Ledger there was no guessing.

I too won’t be surprised if Ledger receives an Oscar, but frankly I’m tired of hearing about it.

Johnny Depp to play the Riddler? That’s almost as good as the rumor that he’ll be playing the role of the “Mad Hatter” in an upcoming Tim Burton version of Alice in Wonderland!

Oh, and Maggie Gyllenhaal was certainly miscast in this film, but she did a fine job in Stranger than Fiction.

@TRO: I must say that I am a Nicholson Joker fan as well. They’re both so different, though; it’s like they’re not the same character at all, which I guess is to their credit for bringing something totally personal to the roles. Nicholson got some great lines: “This town needs an enema,” “Ever dance with the devil in the pale moonlight? I ask that of all my prey…” Great stuff.

i still wish Katie Holmes had stayed on board as Rachel Dawes for the Dark Knight; it was like the time spent getting familiar with her character in Batman Begins was wasted…

Me too. I feel like a heel for saying it, but I just couldn’t envision Bale being romantically attracted to Maggie. I will go flog myself now.