It wasn’t an event so much as it was a vibe — a great feeling. We reunited after many, many years (in fact, until last weekend, I don’t believe we have ever had a Martin family reunion), and spent the entire time laughing, joking, hugging, remembering, telling stories, eating (and eating), and generally just being silly. It was absolute medicine for us all, I’m sure of it. 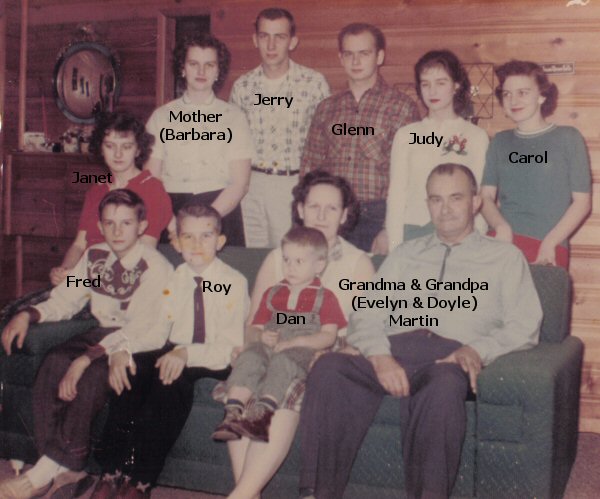 The original Martin family, circa 1958

For those who may not know: My mother was a Martin, and the eldest of nine children born to a family that moved around quite a bit and worked several farms and factories in northern Illinois in the 1940s and 50s. Of the four girls, Judy, Carol and Janet are still with us (Mother died in 1996). Boys Glenn, Fred and Dan have passed on during the past decade.

When our aunts Tina and Debbie (wives of Fred and Dan) came to visit Mavis and me last summer, the four of us got to talking over lunch and decided that dang it, we need to have a Martin family reunion before we all get too old and decrepit to throw one. So T & D got busy. And when I say “got busy,” I mean they joined with their sisters-in-law and put together a gala deluxe. Everything was beautiful, and we are incredibly grateful for their hours and hours and weeks of work leading up to Saturday’s picnic fun.

The first generation of Martin grandchildren, in age order, trying to behave for the camera. L-R: Mavis, Susie, me, John, Andy, Fred, Kristy, Debbie, Tammi and Ryan. Six of us couldn’t attend.

Of course, when nine sibs grow up and get married and have children, and then their children have children, a person has cousins by the dozen. Sadly, many are scattered all over the country (and the world — Janet’s son Jerry lives in Japan) and couldn’t make the trip, but those who could attend made the party that much more awesome. We actually managed to get a “cousin photo” taken with the children of the Original Nine. I love them! 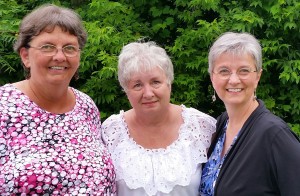 Aunt Judy, who reminds us of Mother in many ways

An unexpected highlight for me was seeing Aunt Judy for the first time in many years. Mavis and I couldn’t stop looking at her; she looks so much like our mother. I told her it was almost as if Mother was with us again, which pleased Judy, as her sister Barbara was also her dearest friend. I’m glad we got the chance to pose for a picture with this beautiful, gentle and kind lady. Her husband, Uncle Marvin, tells the most hysterically funny stories I’ve ever heard. (I’m sure we all have an uncle like Marv, yes?) 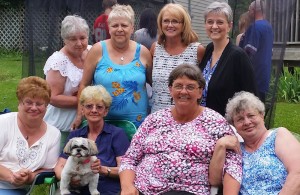 Of course, if it weren’t for who we lovingly refer to as the “Crazy Aunts,” none of this would have taken place. They are among our favorite people in the world, and we’re so blessed to have been able to spend some time with them, as we all live so far away. They are silly, funny, smart and sweet, and along with our beautiful cousin and friend, Susie, we had a blast talking the day away.

I’ve often heard it said that nothing is more important than family, and that you should treasure every moment you spend with them. Heck, I’ve said it myself over the years. The adage proved true in spades this weekend. As we hugged the Crazy Aunts goodbye, we all said that this simply cannot be the last time we do something like this. Mavis and I are already discussing a repeat visit next summer.

You should plan one with your family, too.

Alas, for now, it’s back to reality. I’m not ready to think about school yet, but I do have a piano to unbox, grandchildren to hug and the New Orleans Odyssey to plan, so I’d best get to it. Happy Monday!

Very well said. Don’t think you missed anything. Loved every thing thing that was said. Love you all.

Perfectly written, Bird! I agree on all counts. We are so blessed to have such a big family. We all get along and love each other dearly. Not many families can say the same. I already miss everyone!!

Glad you had such an amazing, wonderful, funny, embracing, unforgettable time. Your Aunt Judy certainly does look like your mother!

How cool was that! I love family reunions! So glad you had such a wonderful time, the memories always last way longer than the event. Thanks for sharing the story and the pics…made me miss my Family! Peace!

That was beautifully said. You 2 are awesome fun. Love you both so much.

So glad you had a good time!!

Thanks, everyone — it was a fantastic weekend!