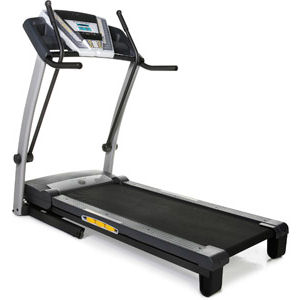 Yesterday, I took that personal day off school. Best day ever. So what could “fall out” from the best day ever? The next morning.

Have I mentioned that people have toddlers in their 20s and 30s for a reason? Or maybe it’s just that we need to get in shape. Actually we know that’s it. That’s why we went out last night and bought this dandy looking treadmill. I say dandy looking because I haven’t tried it yet. It’s still in a heap on the basement floor; after the Thriller and son Lars hauled it in and down the stairs (by the way, thank you Lars sweety), we lost one little black circle washer thingy, and until we find it or replace it, there’s no treadmilling for us. And do you THINK we could get our hands on the Thriller’s big honking rechargeable flashlight? Nowhere to be found. The thing’s as big as a pipe wrench and weighs five pounds — and we can’t find it. Using a little mini-mag and my cell phone light just wasn’t cutting it, and we decided to wait until daylight.

So we spend major green on this huge, fancy contraption, only to be reduced to standing there looking at it, which burns not a single calorie. I know — the purists are saying, “Just get out and run on the sidewalk!” Yeah well, thing is…

I will not walk outside when it’s dark (if you’ve ever broken your ankle, you know the reasons), and I won’t walk if it’s below 45 degrees or raining. That takes up a lot of Ohio days. Too easy to make excuses if you’re a slave to the weather up here. So we removed that excuse. It’s going to really help us both. Our schedules are polar opposites, at least during the school year, so we can both use the treadmill as much as we want and not worry about stepping on someone else’s time.

The thing has an MP3 player dock, and since it’s located downstairs in the Thriller’s office, I have TV so I can watch the early morning news. Cuts into the blog time, but I’ll just have to make up for it. I mean, I’d rather write than exercise, but you know…gotta keep this sassy old chassis moving somehow. I have the 4 & under crowd to keep up with at the park.

Time to go get ready for school. Now if I could just get up. Oi.