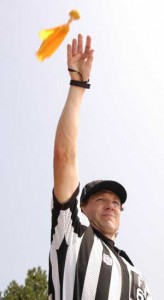 The whole Reggie Bush/Heisman issue: let’s get it over with already. As Don Draper said a couple of weeks ago — “people do things.”

Remember when Vanessa Williams was stripped of her Miss America crown because of racy pictures? No? That’s OK. It’s ancient history, and she went on to have a great career and she’s rich as crap. Nobody talks about it anymore. And so it will go with Reggie Bush “losing” his Heisman Trophy. He’ll go on making great plays for the Saints (dangit), and probably be famous and wealthy the rest of his life. Everyone knows he was the best player out there in 2005. Doesn’t change anything, and it’s not like he was allegedly hiding a huge, terrifying secret, like, oh, murdering his ex-wife and her boyfriend in 1994 (good point, Johnny), not to mention following it with a veritable laundry list of successive felonies.

I’m not justifying Bush’s being a stupid kid five years ago and taking money as a college recruit. Pete Carroll should have known better, too. You makes your choices, and you lives with the consequences. I’m saying that in the long run, it doesn’t matter. When you’re successful and the best at what you do, people tend to suffer amnesia. It’s like getting forgiveness, which isn’t altogether a bad thing. Bush and Carroll both go to the pros, and everyone’s happy. There will be other Heisman winners, and the tradition will go on. “Cementing legacies” is bull; it’s the next winner that counts.

Tomorrow, I shall attempt to impress/depress you with a tale from the other side of the table. Imagine having your career ruined by something you didn’t do.