Sometimes, you wonder what toy designers and manufacturers were thinking of when they invented this stuff. It’s actually quite amusing now, since they’ve been pulled off the market, but when you stop to think about it…

As usual, I don’t know where I picked up the link, but I ended up at radaronline.com last night. Hilarious. From their article about “Very Bad Toys” that were eventually yanked from the market, here are a few examples — some of which you may remember: 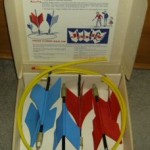 Jarts. We had a set when when Lars and #1 Son were kids. From radaronline:

Lawn darts were massive weighted spears. You threw them. They stuck where they landed. If they happened to land in your skull, well, then you should have moved. During their brief (and generally awesome) reign in 1980s suburbia, Jarts racked up 6,700 injuries and four deaths. 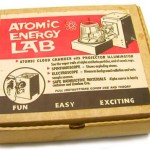 Atomic Energy Lab Kit. Who was the mental giant who dreamed this one up, I wonder? From 1951, this dandy do-it-yourself nuclear experiment came with its own “very low level” radioactive materials. According to radaronline:

The toy was only sold for one year. It’s unclear what effects the uranium-bearing ores might have had on those few lucky children who received the set, but exposure to the same isotope—U-238—has been linked to Gulf War syndrome, cancer, leukemia, and lymphoma, among other serious ailments. Even more uncertain is the long-term impact of being raised by the kind of nerds who would give their kid an Atomic Energy Lab. 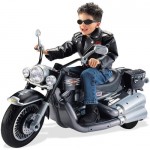 Power Wheels Motorcycle. Yeah, it was fast. And fun — what kid wouldn’t want one? Answer: the kid who wanted to actually be able to stop the thing. Turns out the mini Hogs had a nasty little habit of getting stuck in the “throttle-wide-open” position. Oy.

Riders were apparently “stuck in a petrifying state of perma-acceleration. Presumably, the child on the motorcycle was then taken on a hellish, intestine-twisting scream ride. At one point, he or she would face choices unthinkable except in an Evel Knievel-meets-Knight Rider crossover episode: “Do I jump? Or do I ride it out and see if I can clear the gully? Is it sentient? Can it be reasoned with?”

It’s difficult to be horrified while trying not to laugh. I’m being honest here. Don’t hate me — I’m somebody’s Grammie, fuh cripesake. But the thought of…anyway. That’s enough for one morning.

6 thoughts on “Evil (but funny) Toys”