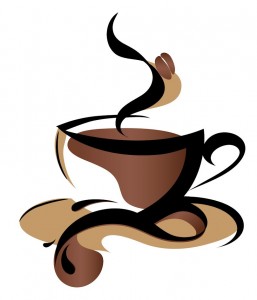 Yes, I’m quoting Willy Wonka sort of quoting William Allingham (Gene Wilder actually said Around the world and…). Did you know that the original Willy Wonka and the Chocolate Factory movie is full of adult-ish literary references? Love it. But that’s not what this morning’s post is about. I will mince no words; it’s about coffee. More importantly: coffee makers.

Back in, oh, 2000 (?), the Thriller and I bit the huge coffee bullet and purchased one of these. We were both coffee hounds, and loved how good the brew smelled and tasted every morning. We were (and still are) even known to make a pot in the afternoon or early evening. I can’t remember exactly why, but when the Keurigs came out, I felt I needed to have one, so we got rid of the big bad Bunn. Meh. The Keurig was fine; I even had one in my classroom. However, we were both bothered by the incredible amount of plastic waste created by the then-unrecyclable K-Cups. So, the hunt continued. 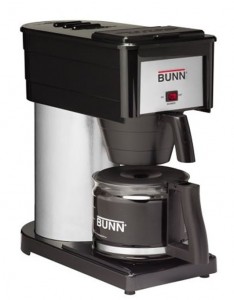 The Thriller bought a standard Mr. Coffee machine, and all was well until I spied a Verismo on TV. Of course, being a self-proclaimed latte aficionada, I had to have one, and the pods were recyclable. So, make room on the counter for the new machine. Again, meh. Turns out I didn’t love it as much as I thought I would. So, back in the box it went, and we decided to get a smaller, counter-top version of the Bunn, which we are still using (pictured at left).

But check this out. In the almost two years we’ve had this unit, a slow-but-sure transformation has taken place. Does this look strange to you? I mean, I know our floors may be a bit out of level in places, but this is extreme. It’s gotten to the point where I have to physically lift the top of the unit to shove the decanter into its place on the heating plate. Bizarro. It has to go.

So, what did we do this morning? We bit the huge coffee bullet and purchased one of these.

Have you ever done that? Gone everywhere and home again? Bonked yourself on the head and said, “Why didn’t I just stick with what worked?”

PS — I still have the Verismo. I’ll sell it to you, on the cheap.

How very apropos since “new coffee maker” negotiations have been going on at the Starbale Ranch for several weeks. We have for years purchased the Mr Coffee type of maker and for the most part they have been serviceable. Our current model is in fact a Mr Coffee, my issue is I like my coffee HOT and with this one I have to “nuke it” 30 seconds for it to meet my degree of hot. Lame! I hate any and all Keurigs type of coffee…would rather drink instant. Now, I have been lobbying for the smaller version Bunn that is… Read more »

Well now…at the Thriller’s suggestion, I sent the photo of my deformed coffee maker to Bunn’s customer service email, only to let them know that we had a problem, and that it was basically a moot point now that we’d bought the VPR model. Don’t you know, the very next day I got an email from them, asking me to quote them the date code off the bottom of the machine, and if it ended in 12, 13, 14 or 15, they’d send me a new one for free. We looked, and sure enough, there was the number 14. So…..new… Read more »

Hey, I remember that machine! Glad you went with the one that brought ya in the beginning.

Always loved the coffee that came out of the original Bunn. Can’t wait for a cup from the new one. Or should I say the, “grandson”. lol

We got some great use out of that one, didn’t we! It made the best coffee, and I don’t know why we got rid of it. Well actually, I do remember us saying that we drank too much coffee and that we needed to downsize and not guzzle so much.

So your first choice was your best. Funny how that works! Never got the Keurig thing – didn’t think the coffee was all that good and it made no sense to me to make one cup. Just make a pot and everyone can enjoy it. But then, I’m weird. I use the ‘Everywhere and Home Again’ to (generally) explain Western Music structure to my students: Start at home (Tonic), take a trip and go somewhere (relative minor, dominant, etc.) and then come home again (Tonic). Granted there are some pieces where this formula doesn’t work, but I like to point… Read more »

I agree — the Keurig stuff was nothing special. And the price and the waste…blah

You’re such a theory nerd — that’s why I love you!! Hope you’re having a good Consort season! Gear up for Advent, sis…………

Never have seen a coffee machine as deformed as yours. Is the coffee on the warmer in the carafe with the orange handle for me? ?

Well even though it doesn’t come with any carafes (we still had our old one in storage — the Thriller *never* throws anything away), I will go investigate this decaf stuff of which you speak, and always have some on hand for you!