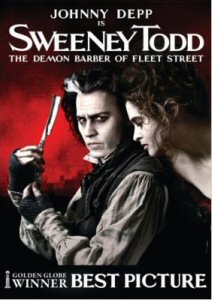 I never really liked the Broadway version. I’d heard it a few times, but was basically unimpressed with all the warbling opera singer voices. [I like opera; just not in that setting.] But there’s something very different about this movie.

Everyone who knows me knows I’m a Depp-o-maniac. It’s not just Johnny’s presence that made it a great movie to me, although his presence definitely didn’t hurt. It’s the music; more specifically, the singing. Although every voice in the film could be categorized as “untrained,” I think that’s what sealed the deal for me, musically. 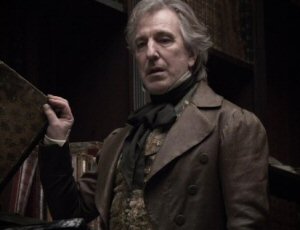 The role of the evil Judge Turpin is played by Alan Rickman – best known as Professor Snape in the Harry Potter movies – and he does quite nicely. One doesn’t hear true bass in musicals very often.

Everything seems so easily sung in the movie, but non-music people need to know that none of these roles were spared any vocal work by genius Stephen Sondheim.

Perhaps the most impressive singing is done by then-14-year-old Ed Sanders, who played Toby, the street urchin “adopted” by Mrs. Lovett. The role is usually played by an adult in the stage version, and the music is intensely difficult. Too bad the kid’s voice has changed by now.

Even Sacha Baron Cohen did a convincing job on his singular feature song. I’d actually like to hear him do some serious stuff to see what he’s made of (“Pirelli’s Miracle Elixir” was a character piece).

Best songs from the movie: “Epiphany” and “A Little Priest.”

The only disappointment – and for me it was huge – was the voice of Jayne Wisener, who played Johanna, Benjamin Barker’s daughter. Ugh. Gorgeous opening tone on the difficult “Green Finch and Linnet Bird,” but then it was all ruined by sloppy, wobbly, uncontrolled vibrato. This from a 20-year-old beautiful girl…she sounded like an aging church choir soprano. 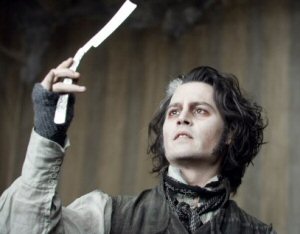 Outside of that one drawback, the film is deliciously dark and disturbing. Ok, I admit I always close my eyes at the throat-slashing, but I can use my imagination.

A friend is coming over Thursday night to watch what will be my 5th viewing of it – should be fun. You need to watch it again, too. Right now. I’ll wait here.