And some people think we theater types live for the histrionics. Take for instance the soap opera swirling around the “women’s” gymnastics team from China (gold medal winners over the Americans). US gymnastics coach Bela Karolyi called them “babies in diapers.” They called him “man chewing on sour grapes.” Regardless, breaking the rules is breaking the rules. If the IOC declared that the minimum age to compete is 16, it’s a rule that should be followed. No getting around that. But then, there’s the Chinese team…

But it is what it is, and griping about it won’t do any good. Team USA (who, on average, outweighs the Chinese team by 15 pounds and is taller by 6 inches) had a great showing winning their silver medal. And let’s face it, those little Chinese girls flew. No arguing that point.

Still…if these are 16-year-old girls (especially the three on the right), I will eat my hat. I’ve read several blogs about it, many with long-winded responses from former gymnasts, Asian people in general, Europeans and other Americans. Everybody’s got a point (I’m paraphrasing here):

“If it was the Americans instead of the Chinese, they’d stop the Games and do an investigation.”

“If it was the Americans instead of the Chinese, no one would say a word.”

Ok, that last one gets an eye roll and a tongue cluck. The little (and I do mean little — she weighs like 68 pounds) girl on the far right is missing a baby tooth. I guess that could happen if you’re 16…Cha, and monkeys might fly out of my…

But, who’s going to bust China’s chops when they’re the hosts? So, when in Rome…or, like the Times article said, ” When in North America, do as the North Americans do — overreact. When in China, overlook.” 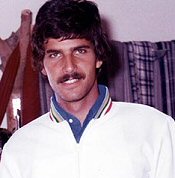 And remember Mark Spitz? He was totally an American hero back in 1972 (unfortunately, he swam his magic at the cursed Olympic games in Munich). He won seven gold medals, and is making news again now that Michael Phelps is looking to do the same, and one better.

But I read an article about Spitz this morning that was a bit disturbing — sometimes I wish people would just let me remain happily ignorant in my delusions.

Then there’s this. Whatev.

And while it’s not an Olympics matter, it’s olympic in its shame: there’s no excuse for this.

And that’s all I have to say about it. You have a lovely day. Whoa…it’s Thursday already. I lost 24 hours somewhere.