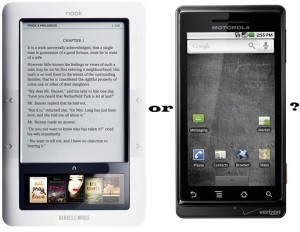 Which one?
So I told the Thriller several days ago that I was going to make one purchase or the other; not both. (Between you and me, I want to hold out for getting “the other” as a Mother’s Day gift FROM HIM. Shhh.) Getting both just isn’t in the budget right now.

So which one is it? I’ve gone back and forth within the last 24 hours. My contract with Verizon allows for a discount upgrade this Sunday. I will choose by then. I really had my mind made up to get the Droid until I read this article in the Guardian, which suddenly found me wanting a nook all the more. Guy made me laff, too:

The lack of a cover immediately alters your purchasing habits. As soon as I got the ebook [reader], I went on a virtual shopping spree, starting with the stuff I thought I should read – Wolf Hall, that kind of thing – but quickly found myself downloading titles I’d be too embarrassed to buy in a shop or publicly read on a bus. Not pornography, but something far worse: celebrity autobiographies.

Hey, what’s wrong with celeb bios? I like ’em…

Of course, there are far more important things in life to think and worry about than which toy I want. But at the moment, I’m having trouble coming up with an example.

Go with the phone. Then again, I’m somewhat biased considering the Nook and Kindle are just fads to me. I’d rather have a real book than a circuit board but that’s just me. ReplyRat Fink Reply:February 17th, 2010 at 4:20 pmI hear you, Will. I love books too – the real kind. But I also want the best of everything. A Nook would be fantastic for my vacation this summer, and for nighttime reading in bed. For instance, I’m reading Under the Dome right now, and it’s like 700 pages. The book weighs a ton, and I really struggle to… Read more »

I got a Sony Reader as a belated Christmas present this year. Actually my stepdad got one and I helped him set it up on his computer. By the time I was done, I wanted one too. (The fact that they come in PINK clinched it.) I love it – fits in my purse and I can carry several books at once. Phone, schmone. Stick with your BB. Droids have issues. PK ReplyRat Fink Reply:February 18th, 2010 at 5:24 amHey I wonder if the nook comes in pink…I know they have pink skins you can buy. I’ve done a lot… Read more »

I have to go with the Nook. Only because I want one too.

Geez…that’s all votes for the nook and none for the Droid! Hmmm…gotta rethink this….

NOOK NOOK NOOK NOOK! Bluvox got his in time to load it up with a few eBooks & take on the cruise. I gotta say: eReaders are “the New iPod” – I mean, you couldn’t swing a dead cat without hitting someone on the cruise who had their Kindle or Sony eReader out on the deck poolside. I think BV was the only one out of 2000+ people that had a Nook. And it ROCKS! The “feel” of it is substantial, without feeling cheapy/toy-like or heavy. He says that it’s WAY easier to hold while laying in bed reading than… Read more »