…Howard Stern is a misogynistic, ugly, lowlife bowl of pureed bile. How he got his own radio show in the first place is not worth a nanosecond of my research time, but whatever the reason, it’s lame.

And what’s more troubling is that the 18-30 male demographic thinks it’s oh-so-hip to like him. Lemmings.

Now, while any members of the aforementioned demographic who might be reading this giggle like school girls behind their fake Oakleys while they comb their mullet cuts in front of their Confederate flags which serve as window coverings, I will say that I am no prude. I don’t flush crimson at the occasional off-color joke. Nor am I a Femi-Knot See. I just find it ridiculously unfair that a white stand-up comedian who drops the “N” word in an adults-only night club gig is publicly vilified and threatened with bodily injury and lawsuits, while this Stern moron can spew his filth on open satellite airwaves with impunity and not get so much as a wrist slap.

The world is going straight to the devil.

His latest junior high prank involved singer Dolly Parton. He and his mewling, pathetic sycophants did some idiotic edit of her audio book (Remember those silly songs back in the 70s that spliced comments of famous people as “answers” to stupid fake interview questions? That’s the juvenile crap we’re talking about here. Hilarious.). In it, he depicts her as saying vicious and graphic things. She was humiliated, and went national to apologize to her fans. I hope she proceeds with a lawsuit. Not that it will stop him, mind…

It’s incredible: he always seems to find the dumbest people on earth. They gravitate towards him like a homing beacon. [Coincidence?] Case in point: a consummately stupid Connecticut teacher goes on the show and ends up having to resign at her school. Hope it was worth it, sweety. What a credit to the profession.

One good thing about him: decent rhinoplasty job. If only there was plastic surgery for the brain…

I’d give my real opinion as to why Stern takes such giddy glee in being a complete meanyhead towards women with brains, but this is a family blog.

On a lighter note….

Wanna see what happens when I catch a student writing “Wash me” on the tailgate of my truck? 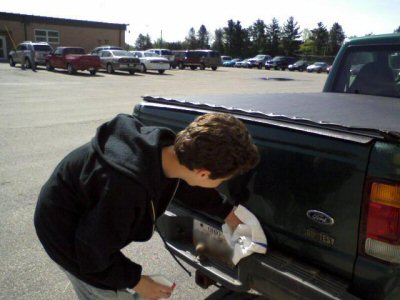