In 4 years of high school, none of my history teachers ever brought it up.

What 20th century event killed 20-50 million people in one year?

Was it Viet Nam? World War I? World War II? The Korean War? The Holocaust death camps? Nope on all counts. It didn’t have anything to do with guns or bombs or gas chambers.

It was the flu.

The influenza pandemic of 1918 still stands as the single most deadly epidemic in history. And it didn’t start in some remote jungle in South America. It began in Kansas.

A soldier at Fort Riley reported to the infirmary on 11 March, 1918, complaining of a bad cold. By the end of that week, 500 more were in the hospital. Within days, they were all dead.

The next month, similar incidents surfaced in Boston and Philadelphia. By the fall, people in Chicago were dying. And it wasn’t a long, drawn-out thing, either. People died within days of contracting the flu — death by asphyxiation. They simply suffocated trying to draw air into lungs packed with foamy red slime. 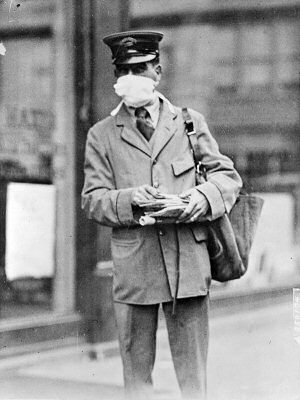 Folks were freaked. They made gauze masks, as if that would stop the virus in its tracks. Soon, the dead bodies were everywhere. In the streets, in bedrooms…the dead were piling up so fast, people didn’t know what to do with them.

Theories circulated about what could be causing the sickness, from dirty dishwater to the Germans poisoning air filtration systems and water delivery methods.

In the middle of all this, there was a war going on, so the military had to send boys over to Europe to fight. Only problem: they took the flu virus with them.

Soon, two continents were sick. But it was far from over in the US. It cut a swath from the east coast all the way to San Francisco, where it killed hundreds, but then mysteriously died out. The city blasted the sirens, telling folks that all was well. Within a month, 5,000 new cases were reported.

By November of 1918, it was killing 10,000 people per week. Then, like a deadly tornado being sucked back up into the sky in an instant, it was gone. Done.

In 2004, researchers at National Geographic used some tissue from a flu victim buried in the Alaskan permafrost (fortunate, because there were no freezers to preserve tissue samples in 1918), and concluded that the virus was spread by birds. Bird flu. Sound familiar?

Strange, how nobody talks about this. I would have moved to Nicaragua. Started making clothes and hats out of hemp.

We watched a documentary on this in Adv. American History a few months ago. Before that, I’d never heard of it. Crazy.