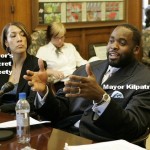 To Kwame – having an affair, while unseemly, is not against the law. Lying about it under oath, however, is.

Looks like one nightmare is over for the troubled, now ex-mayor of Detroit, with another one waiting in the wings; namely, jail time, disbarment, probation from seeking elected office for five years, and making restitution to the tune of a cool $1M.

It’s been interesting over the past few months to watch this story develop (and degenerate). I mean, people fall down sometimes. I have no rocks to throw or ax to sharpen. But the proof was in the text messages. How do you fight that? He maintained his innocence for such a long time — and now, to come clean when it was clear he had no other options simply makes him look silly. And don’t forget guilty.

Personally, I chalk it up to a flaw that trips up the best of us: the obligatory pride which goeth before a fall. Hubris. I-can’t-get-caught-ism.

The Thriller has a saying that really makes sense, and I plagiarize him on it all the time: People will ride the gravy train until it stops running. That’s what Kwame did. The action was great and the perks were many. He was drunk on his power, which clouded his better judgment. I don’t think he’s a bad man; rather, I just think he took a gargantuan detour to Stupidville because he (apparently) believed there was no one watching him as he ultimately painted himself into a corner. That gets ’em every time.

For real…how many Kwames are there out there in public life? Many are nice guys (and girls) who simply believe they are above reproach or censure, so they throw caution (and common sense) to the four winds and behave as if life’s a big frat party. Fun while it lasts, but, as Yours Truly is wont to say to her students: Ya makes yer choices and ya lives with the consequences. And Kwame is reaping his harvest right now.

The outcome reminds me a little of the quiz show controversy of the 1950s. What Charles Van Doren did (fooled the TV public by getting the quiz answers ahead of time) was not illegal, but lying about it to a federal grand jury….

The crazy things we do.

That’s enough spewing of gray matter for one morning.