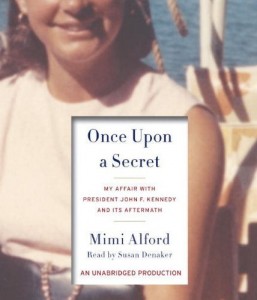 All right, I drank the Kool-Aid.

After hearing about it on the news and giving in to my gnawing sense of nosy, I Nooked (hey, I just made up a new verb) Once Upon a Secret, the new memoir by Mimi Alford, detailing her love affair with President Kennedy. Although I’ve only read a little over half of the 160-some pages, I’m already feeling a bit creepish. There’s just something…I dunno…incongruent about the whole thing.

Mimi was raised in a healthy, wealthy, straight-laced, happy WASP family on a sprawling colonial farm in New Jersey. She went to preppy schools and learned preppy ways and attended preppy debutante balls and had preppy dreams of marrying and having preppy children after getting a preppy education at the all-girl Miss Porter’s School in Farmington, Connecticut. Jackie Kennedy, an alum of the same school, indirectly influenced Mimi’s being invited to Washington to intern for a summer. This is, of course, where she met JFK, and where all her preppy, straight-laced, good-girl training went down the tubes in a matter of hours. Literally, hours. By her fourth day there, the 19-year-old was doing the deed with the Philanderer-in-Chief.

So far, the prose is littered with “I don’t regret it,”  “I didn’t see myself as a home wrecker, but rather someone for the President to be with while his wife was away,” “I couldn’t say no,” and allusions to her naïveté. Gotta admit, some of it just doesn’t ring true, and honestly, it indicts her character in 2012 more than invokes pity for her lovesick confusion back in ’62.

In her defense, however, she didn’t let the cat out of the bag (save for a small circle of confidants) all these many years, until 2003, when a reporter in New York uncovered some evidence and threatened to go public. Long story short: She decided to tell the tale her way, rather than have people linger on in assumption purgatory.

Still, her insistence on having no feelings of remorse (at least so far) is troubling. She’s a respected businesswoman, working for a large church. She grew up,  married, and had children. It’s bothering me ever so slightly (and I ain’t no prude, mind) that she wants this book to be a legacy of sorts for her grandchildren, when it’s so heavily laced with repeated disregard for Jackie and her kids. I know that Jackie knew about her husband’s proclivities, and turned a blind eye to most of it; in many ways, it was as much Jackie’s fault, and the way of the times, but still. So far, to me, the memoir has some backfire to it.

Oh well. I’ll keep reading to see if it gets better, but right now, it’s kind of uncomfortable. Like peeping. Heh.

Is it Friday yet? BLAAAAAAH

Have you ever read the book “The Kennedy Detail” by Gerald Blaine? Written by a member of Kennedy’s Secret Service detail. He tactfully left out Kennedy’s personal “activities” but a very interesting read.

I have not! I’ll put that on the reading list.

I get it… went down the john….. har har har. I’m going to assume that was intentional on your part. Seems like anyone can write books like that…. sure, I had an affair with JFK too…. Never mind that I was only 5 when he was assassinated. Details, details. Interesting that anyone who can refute anything is dead or in their (forgetful) dotage. What’s that I hear??? Cha-ching, cha-ching. Legacy for her grandkids? Suuuurree it is. And I have some swampland in Florida you might be interested in purchasing as well.. PK- ever the cynic. ReplySuzanne Reply:February 9th, 2012 at… Read more »