Yesterday, I looked at the photo of Rousseau (the one on the left, below) I have as the desktop background on my computer at school. Then I got out my phone and looked at a picture I’d taken of him last Sunday. Wow…we all age, don’t we? Even pups. Look at the difference seven years make:

As I sat and looked at the two photos, I bawled. I know the time is coming — the time no pet owner wants to confront. He’s 12 now (13 in September), and we notice he’s moving a lot slower. His eyes are a bit droopy and cloudy, as opposed to alert and radiant chestnut brown. He often struggles getting up from the floor. These last two “things” he’s endured (the surgery and the stomach sickness last week) seem to have really taken the wind out of him.

The clock is ticking, and I don’t like it. Of course, we are going to adore, spoil and enjoy the heck out of him for however many years he has left. He’s still as affectionate, gentle and full of personality as he was on the day we got him. The two breeds that make up Rousseau (English Springer Spaniel and Australian Shepherd) have an average lifespan of 12-15 years, so it could be that we’re nowhere near that day. But…that day is coming. It’s the singular terrible thing about loving an animal. 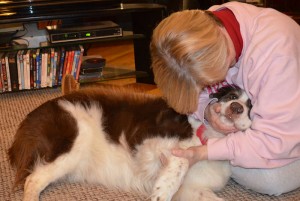 Great big ol' baby.
There are several aging pets that I know of among my RtB fiends. In my immediate family alone, there are two Labradors, a Poodle and a Beagle who are all 9, and an 8-year-old Shetland Sheepdog. BoomR’s dogs are getting up there, too, I think. Chevy, the Famous American Cat who lives with Suzanne in the Netherlands has got to be 15 if he’s a day. The Thriller and I are not alone in the realization that our beloved four-legged kids are inching ever closer to the home stretch.

Stan Rawlinson wrote in his Ten Commandments From a Pet’s Point of View:

Go with me on difficult journeys. Never say, “I can’t bear to watch,” or “Let it happen in my absence.” Everything is easier for me if you are there. Remember, regardless of what you do, I will always love you.

[I can never get through that list without completely breaking down. Cue Sarah McLachlan, In the arms of the angel…Oy.]

So I will most certainly, if circumstances go that way, be there when Rousseau takes his final journey. But for now, I think I’ll get my tennies on and take the Old Man for walk through the park. After coffee, of course.

Crazy how we fall in love with our pets. Still now, a couple months after Cretey died, I expect her to be at the front door by the time I hit the driveway. The house continues to feel empty without her. But what a great dog she was. What a great dog Rousseaus is! He has a very special family. I’m sure his doggy friends are jealous. There’s not doubt in my mind that he is the most spoiled, loved dog in town. Enjoy the lovely walk through the park! *hugs* to Rousseau. And you. ReplyRat Fink Reply:May 30th, 2012… Read more »

Oooh sweetness you scared me at first…..but he’s still here. And Chevy, The Famous American Cat is, too (you got it right, he’s 15). And yes, we know That Time will come but until then there will be much spoiling and cuddling. Chevy acts like he doesn’t like it but I know he does. XOXOXOXO *smewch* ReplyRat Fink Reply:May 30th, 2012 at 11:40 amYou know, I went back and read the title and first line, and I can see where you would have thought that Rousseau was gone — sorry about that! I think when that day comes, I’ll be… Read more »

I think Duke is 11 years old now… and you’re right, he’s definitely slowing down SOME… but often times he’s still as feisty as ever. Just a lot more white in his face.