After a fantastic couple of hours with RtB fiend RD and his wife, we drove the final 90 minutes into the city yesterday. It wasn’t a bad trip at all, and we found the hotel easily.

We’re staying at the historic Mayflower, where many presidents and dignitaries have dined, danced and slept. We took a walk after a late dinner last night, and opened some doors to peek in at some of the dated but beautifully ornate architecture. The Grand Ballroom has seen its share of important feet across its carpets; looking in on it gave us a creepy sort of Overlook-from-The–Shining feeling, but it was gorgeous and smelled of history and I loved it. 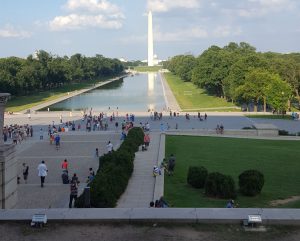 It’s a very long walk from Washington to Lincoln.

The National Mall is larger than you might imagine. It’s a mile and a half between the Washington and Lincoln monuments alone, and farther beyond still is the Capitol building, which you can just barely see in the far distance in the picture I took at left. (Click the expander icon at the upper right after clicking on the photo to see it at full size.)

We walked from the hotel (up behind the White House) to the Washington Monument, to the Lincoln Memorial and its 145 steps, to the Viet Nam and World War II monuments, through Constitution Park, back out onto 17th St. and back up to the Mayflower. Over three miles. Kinda toasty.

After guzzling drinks and taking showers and cooling off, we decided to have a small, light dinner at Edgar, the restaurant inside the hotel. Neither of us felt much like schlepping out onto the sidewalks again to find food, so this was perfect.

We looked at the appetizer menu and asked the waiter about the Wagyu (Japanese cows) meatballs on brioche. He said there were four small meatballs on the piece of bread, with crushed tomatoes and shaved Parmesan. Perfect. We both ordered one, and a side salad: the Thriller got the wedge salad, and I ordered a Caesar. Nice, light fare.

This is what arrived.

Again, as with the size of the Mall, the photo doesn’t do this “appetizer” justice.  And the size of my salad bowl rivaled what I put mashed potatoes in at holiday family dinners. We both said “Whoa!” as the waiter set down the food. We did the best we could under the circumstances, and forced much of the deliciousness down our gullets. After our walk around the building, we came back to the room, where the Thriller watched his White Sox game online and I read. Then it was time for Zs.

While I’ve been up since 3:44 (I was so hoping my clock said 5:44, alas), I’m not tired. I’ll be tired when it’s time to hit the Metro to go to Arlington, the Holocaust Museum and Ford’s Theater/Petersen House, though, so bring on the coffee, bro.

What a super joy for us to have lunch and some time with the two of you yesterday! Simply put, it was wonderful to see you. Walking the Old Winchester Mall was just a warm-up to the Washington Mall :). Sounds like your trip into DC went smoothly. Hopefully traffic was not too heavy. You’re off to a rip roaring time in DC with all you did last night. More adventures on tap for today. Plenty to see in DC. Thanks for sharing your adventures via your blog. With your delightful accounts you provide us with vicarious enjoyment. That’s good!… Read more »

It was great to see you guys, too! Traffic was fine — the Thriller was worried for nothing.

See you back in A-town hopefully!

Wow! You guys have really put in the miles already! The pictures are wonderful. It’s like I’m right there with you. Can’t wait to see pictures of the museums! All is well here at the home front, so enjoy your trip! Thanks so much for sharing with us fiends!

You’re welcome, Mave — seems like most of our miles have been on FOOT! lol

MMMMM Lekker! Sounds like you are off to a good start!

It was lishy! We just saw on the news that part of Shenandoah Nat’l Park was shut down due to a very unafraid bear attacking folks. NICE. That’s our next stop…oi

Whaat?? Oi is right! Is it the part where you are heading?

I don’t think so…not sure where the bear was exactly, and it’s a huge place as you know. I think we’ll just stay with the park rangers — like, attached to their belts — on any hikes. lol

I have stayed at the Mayflower, I love places that are examples of obviously “old” opulence.
Glad you guys are off to a great and busy start to this Odyssey! The Mall is incredible with so much to see…love be the view back from the Lincoln Memorial.
Enjoy, be safe and wear good shoes! Peace!

We love it here! The room is smallish, but we don’t care. We’re just there to sleep. And you’re right — with so much to see on the Mall, we’ll never get to it all, so we had to be really choosy with the museums and such. American History yesterday, Air and Space today, and more if we have time. I’m in my good Reeboks, but my dogs is still barkin’!!