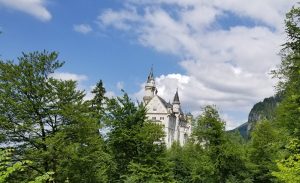 OK, so I scheduled this stop with the sole purpose of seeing this castle, built by royal nutjob Ludwig II of Bavaria, and in which he lived only 173 days, before his death under “suspicious circumstances.”

The king’s childhood home is right down the road; you know, on another mountain. It’s called Schloss Hohenschwangau. Notice in both castle names, there appears the word schwan, which is German for “swan” — the family crest.

Anyway, Neuschwanstein didn’t disappoint. Of course, we weren’t allowed to take photos (a member of castle security followed our group around for the entire 35-minute tour), but I did get a few photos of the exterior. Impressive… 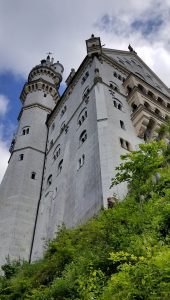 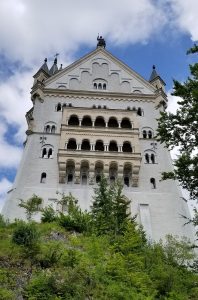 It’s a mile-long walk uphill to get to the castle, and since I was tired already, I opted to take the bus up and down. Little good it did, as they let you off at a drop-off point, and you still have to walk a half mile uphill. Once you’re inside, there are at least 10 spiral staircases (I lost count) with 15 steps in each. Climb, climb, climb. With virtually no handicap access, you have to be willing to schlep up and down the stairs if you want to see it. It was OK though — after all this rich food, I needed the workout. And boy did I get it.

The bus back down was an exercise in sheer terror. The lunatic bus driver went 30 MPH around curves, I swear it, with people jammed on the bus in excess of twice the capacity. Here was my view, all the way down. Some guy had his butt on my leg the whole way. Horrifying. We all thought we were going to tip over and go head over heels down the steep side.

But on to my travel day… 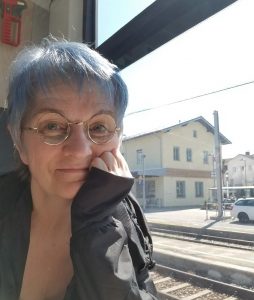 It’s been a long haul over the last 12 hours, from Germany to northeast Italy, and I’ve been tired all day. But I didn’t mind; part of the fun’s getting there, right? And I knew I needed to drag it out bigtime for one day in order to make the final leg of the Odyssey.

Let me say first: I have ridden nine different airlines in my lifetime. I know that may not be many to some, but it’s a handful for me, and you know who’s #1 on that list? Air Dolomiti. Man…the Americans could take a lesson. Boarding is NBD — everyone was on the plane (which they opened at both ends — front and back — imagine that) in minutes, and take-off was a minute early. They gave all instructions in Italian, then followed with English. They were quick, friendly, and efficient, which automatically put the passengers at ease. A+, AD!

I started out the morning with breakfast at the hotel, and then checked out and walked a hundred yards down the street to the bus stop, where the #78 took me back to Füssen and on towards Munich. Fortunately, there was no one in 1st class with me for the first 2.5 hours of the journey, so I had some quiet time.

Things went sideways a bit when my second train was rerouted and I had to get off and find another one, but I found one, and went the rest of the way into enormous Munich Airport, where I caught my plane to Trieste.

Tomorrow, I take a train to Venice and check into my hotel. I’ll wander the canals solo until Thursday, when I meet up with Kay and Bob. We’ll have lunch, and then Bob will drive the rental car to Slovenia (right across the border), and Kay and I will have a day to ourselves in Venice. We plan to go off the beaten path and hopefully find some treasures to tell you about.

I was going to go find some dinner here in Trieste, but it’s already going on 9 p.m., so I’m having hot tea and cookies and calling it a night. Early train in the morning — I’m out. See you tomorrow!

Wow what a trip!!! I am glad I wasn’t there to slow you down.

You still have lots of adventures to go, I can’t wait to read about them!!

Wow! Another stupendous, adventurous day! I’m exhausted just reading about it. Thanks for sharing it with us.

You’ve had quite the adventure so far! It will be nice to relax and enjoy Venice with Kay. Then it’s on to Slovenia where you can relax some more before making the trek back home. Thanks for keeping us all with you on this wonderful trip!

Loved the pic of your view on the bus…you are quite the adventurous traveler!
How do you say “ get your butt off of me” in German? ?
Stay safe, enjoy!

I am enjoying this trip with you
Thanks for
bringing us along.