Today, we left the big city to visit Suzanne and Harold’s home in the small town of Franeker, in the region of Friesland.

It was a day of quiet discovery, as they took me to several places in this old town that date back to the mid-1600s. What a delight!

First up was a tour of Franker’s pride: the oldest planetarium in the world.

In 1774, amateur astronomer Eisa Eisinga told his wife that he wanted to build a place where he could study the planets — and he wanted to build it in their living room. Mrs. Eisinga must have been a saint, because she agreed, and the rest is history.

What resulted was a mechanical marvel that has been keeping an accurate record of the movement of the planets and the precise clock time for 245 years, without stopping. It was a wonder to see.

The guts of the machine was housed above the ceiling, using all moving parts, timed to perfection. I am amazed at the mechanical and mathematical prowess it took to manufacture a scientific feat of this magnitude in the 1700s. And all the planets (Uranus and Pluto had not yet been discovered, so the model stops with Neptune) revolve according to their timed movement in the heavens, so their actual motion is undetectable by looking at them for five minutes. But a revisit in six months would reveal all the planets in different places, making their way around the sun. Incredible.

We had lunch at a beautiful cafe in the town square, across the street from an orphanage built for lost children in 1668. As with many other Netherlands cities, the town was built on a large canal system, which was used for trade. Modern life has definitely come to Franeker, but they do their best to mask it from view. The streets are still brick and cobblestone, and there is very little motor traffic (mostly walkers and bikes). None of the architecture from the 1600s has changed that I could see.

Then we went back to Suzanne and Harold’s place for coffee, cake, and relaxation. (S & H observe the Dutch tradition of koffie en cake at around 3:00 each afternoon. I was happy to join in, because it’s, you know…cake.)

They have a beautiful home with gardens both in the front and back, with a “catio” Harold built for their three cats: Brahms, Mozart, and Rachmaninoff (“Rocky”) — all three Ragdoll cats with velvet fur.

This is where I’d like to say a huge thank-you to Harold. He took three days out of his vacation from work to schlep around his wife and her crazy friend back and forth to Amsterdam twice, and to sightsee and help us find trams and trains and our way around the city, and to basically be our go-to guy for every little thing, including being my translator at the electronics store when I realized I’d brought the wrong adapter for the electrical outlets, and being beyond patient with my endless Dutch questions and general yammering. 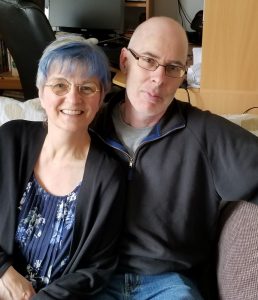 He is a dear, sweet man and a wonderful friend. I love you, Harold! You’re the best.

And now, Suzanne and I are back in our hotel rooms in Amsterdam, where we’ll have breakfast in the morning and jet off to Vienna. I’ll talk to you once we’ve gotten through Day Three!