Day 11 was full of conversation, beautiful scenery, and family!

We spent the day in and around the Slovenian capital city of Ljubljana (roughly pronounced loo-blahna), one of the oldest cities in Europe. Driving through the countryside, it’s evident that the northern part of the former Yugoslavia identifies much more with Austrian/Alpen roots and culture than its southern neighbors, who favor Italian and Turkish ways and architecture. Still, it was all gorgeous. 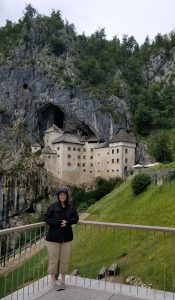 The day began with showers, and it was sprinkling pretty good when we visited a 13th-century castle near Ljubljana, built directly into the mountainside rocks. Predjamski Grad was built by a landowner as a retreat, but was later used by robber baron Erasmus in the 1500s.

I was beginning to think that the day would be besieged by terrible weather, but then, as is so often the case around here, the clouds parted and the sun came out, and stayed with us for the rest of the afternoon and evening. We continued on into the city, had a lovely lunch, and did some sightseeing.

In the city center, we parked at the highest point and took the funicular car (oy) down to the oldest part of town. (At least this contraption sat on a track, instead of hung from a wire.)

It provided beautiful views of the city, however, as all photos reveal a delightful array of terra-cotta rooftops and old stucco construction.

After our lunch at an outdoor cafe, where our waiter and I had a heated discussion about LeBron and the Cavs and the NBA in general (go figure), we explored the old section of the city. Kay bought some items from her favorite store, Bob stopped to listen to a musician play old Slovene folk songs on the accordion, and I bought some Slovenian chocolate, tagged along, and enjoyed the views.

Then it was on to the small village of Podlipa, where we had a marvelous dinner and great conversation with members of Bob’s extended family. Maruša and Janez were splendid hosts, and the food and the company were wonderful. It was fun to listen to the stories of when Bob visited in 1968 as a young man, and everyone laughed at Uncle Vinko’s hilarious observations.

It was another fantastic day of discovery, beauty, laughter, and friendship that I’ll remember forever.

Today, on my last full day of this adventure before jetting home, we will go to the seaside, visit a medieval village, and take a hike through the forest here in Nova vas to try to find some World War I artifacts.