So last night around dinner time, #1 Son text-messages me:

“Whaaaat?” was my response. So the Thriller and I turned on the set, and when the sports report came on, sure enough, there it was, albeit just a few words about it. Hmmm.

What I learned was both interesting and disappointing. See, I don’t think Romeo’s the guy. He’s a class act, but after what — 4 seasons now? — with the team, they still can’t make it happen. Any GM (even Browns General Manager Phil Savage, who, by the way, got into a little trouble of his own a couple of days ago) needs to believe that after giving a coach a fair shot and the team still can’t win, other plans need to be considered. 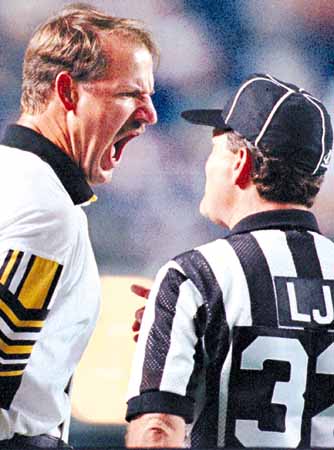 So here’s the deal. The rumor says that someone “close to the organization” has reported that:

Well now, I just had to check all that out. And here’s what I found:

This particular rumor has been around for awhile. Last night, I read posts on forums about it dating back to September of 2007. The earliest mention of it was in 1998, when the Browns were poised for reinstatement to the NFL after being ripped away from Cleveland and given to the highest bidder out there in Maryland somewheres. Says the New York Times article from ’98:

Last week, Pittsburgh Coach Bill Cowher, at an impasse with the Steelers over a contract extension, indicated he might try to be general manager and coach of the Browns.

Well, as we all know, that didn’t happen — just like it probably won’t happen now, at least in the foreseeable future, for a minimum of two reasons:

Personally, I’d like to see Angry Man With Strange Looking Chin come to Cleveland. (And apparently, so would a lot of other people.) We haven’t had a decent coach since Marty Schottenheimer.

8 thoughts on “Dangling the carrot”