It’s no secret to my family and friends that I possess slightly more than a passing interest in the Beatles, to include their history, their influence on popular culture, what inspired them, and the occasional darkness that fed their collective genius.

However, this decades-long quest has also revealed some uncomfortable truths about them. Shouldn’t surprise me; everyone has their unlovely side. But John Lennon’s was of such an unappealing variety (to me, anyway), I have trouble reconciling my scream-till-I’m-hoarse, gaga teenage dreamy picture of him with the man he actually was. Unfair of me, really. 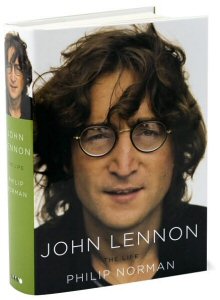 Quite possibly the most compendious — and most difficult to prosaically read — of any Lennon book I’ve read has to be the latest from Philip Norman: John Lennon: The Life.

[This was one of the best pictures ever taken of him. Home run on the cover, Phil.]

I’m about two-thirds through the book. It’s a fascinating, yet difficult, read. Very heavy, stodgy British writing. Not that there’s anything wrong with that. It’s just a different way of telling a tale and I’ve had to get accustomed to it. The double edge lies in the recounting of the ease with which Lennon dealt out cruelty to the people who loved him the most: his wife Cynthia, his son Julian, his manager (and secret admirer) Brian Epstein, and his close friends.

He could be at one moment compassionate, giving and kind, and at another, unmercifully vicious. He often berated his closest friends, insulting and humiliating them in public. Epstein was the recipient of many of Lennon’s one-line zingers, and he habitually absorbed them with silence and compliance. When Brian made a rare suggestion in the studio one day, John snapped back at the crowded control room with, “We’ll handle the music, Brian. You just worry about your 10 percent.” He incessantly and openly mocked Epstein for being a Jew and a homosexual.

Explosive and reactionary, he was heard to tell 5-year-old Julian, “No, I’m not going to fix your f*****g bicycle!”

He also had a bizarre need to make fun of the physically and mentally handicapped. Old TV footage bears this out. I have often seen him on film, pretending to be crippled or making faces that suggest he is a palsy victim. I have countless pictures in scads of books that show it as well. Bizarre. Traceable in cause and nature, but still bizarre.

The man was human. I’m not indicting him for being a) an insecure artist, b) something other than an angel, or c) a product of his environment and upbringing, which we all are. I’m not indicting him at all, actually. I’m just stewing in my kettle of realization that our idols put on their socks the same way we do. And that we’re all paradoxical in our own fashion. It’s all good.

Being a fellow Beatles fan, I too have read many books that have hinted at Lennon’s dark side. I was always puzzled by the way he abandoned Cynthia and Julian for Yoko. I believe C. came home from a holiday he insisted she take to find Y. in her bathrobe. . . not sure I have that completely right. Also, “Norwegian Wood” is a beautiful song-but it is about his affair with Yoko. Cruel? Hell yes. And since I have been a “grown up” I find it ironic how he sang of peace and love yet treated many people so… Read more »

Yes, birthday girl, you most certainly may read the book — I’ll bring it to school when I’m done. Just read the “Norwegian Wood” passage the other night. Your memory was close. Actually, it was John’s affair with the wife of a close friend that inspired that song. The apartment where they had their trysts had Norwegian spruce paneling or something. HA And the indignities that Cynthia put up with…sheesh. Remember the story about her being left at the train station, bawling? The crush of fans and the press separated her from John and the others, and they just left… Read more »

Wow I need to read that book! I didn’t know that Brain Epstien was a Jew and that John treated people horridly. But I haven’t read all of the book’s like you have. I guess I’ve only seen the good side of John.

It is a very informative read, Maelea. I’ve learned much more about Lennon’s childhood and family life from it. It is tragic in many ways too, though.

I read the first third of the book at Barnes and Noble once. Its too bad he had such lousy parents. Though I guess if it took lousy parents and acting like a bastard to eventually be able to make the music he made…I’m thankful it went that way.

Ah, yes. At what price art? We are definitely the beneficiaries of everything he went through.

Do you think he was responsible for the death of Stu Sutcliffe?

If you’re referring to the fight they had when Stu got kicked in the head, I don’t think so, because the dates don’t really work out.

Didn’t we recently go through that “crappy parents = musical genius who died way too soon” thing here recently with the white gloved one? (and of course not the one with whom you share an abode?)

Why yes we did, Boom Boom. Funny how that makes a lil pattern in the fabric of life, eh?

Nature/nurture issues aside, I think it’s the choices we make in life that matter the most, don’t you? I mean, what if John hadn’t played his guitar for the Woolton parish fete that day? Maybe he would never have met Paul. Life’s a series of those kinds of fate-switchers, IMO.

Like…what if you’d never taught in Ashland? What if we’d never met? I hate the thought!

HATE the thought is right, sistah!