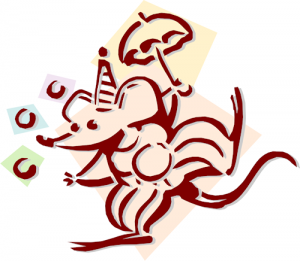 Happy, happy. Another school year in the books. And you know what my first thought was? I need to plan out my summer to get as much work done as possible. I should be either stoked or filled with dread. I think I feel a little of both.

I did the ceremonial canceling of the alarm last night before I hit the hay, around 11:00. Slept in till 5:30. Score.

Tonight, we take our sweet Remy to a dog trainer for evaluation. She told the Thriller that it’s more than likely going to just take a metric ton of patience to help him get over his all-consuming fear of absolutely everything (people, other animals, strange noises, thunder, someone dropping a fork on the floor, the occasional raised voice, mirrors, Frisbees, the sidewalk, cars, the Thriller’s recliner, etc.). She will also evaluate the benefits of any possible training exercises. We tried that once, and it was a dismal failure because Remy was so scared of the teacher, he just collapsed on the floor and wouldn’t move.

Strangely though, he’s totally fine with Dusty and Oliver, Seamus’s dogs. No fear at all. While he’s definitely a “follower,” he doesn’t run and hide from them, or stand and bark wildly at them, which he does with every other animal he encounters. Good thing, too, as we’re hosting the dynamic doggie duo for a week in July. I think that’ll be really good for Remy, actually.

I tend to get impatient, which is dead wrong. We’ve had him for only five months; I can’t expect him to change two years’ worth of ingrained behaviors in that short a time span. I sure would like to know who — at the very least — threw him in a cage and left him there, with obviously no human touch or animal interaction. Truly, it broke my heart when this trainer told us that it sounds like he has absolutely no self-esteem. He thinks he’s worthless.

On the contrary, we think he’s fantastic, which makes us all the more sad that he’s struggling so much with life in general. He has nothing but love all around him; he deserves to enjoy it. But Mama Fink needs to be more patient.

At least I have time for patience now.