On a cursory check, I found that this particular week (5 – 8 August, roughly) was quite busy historically. 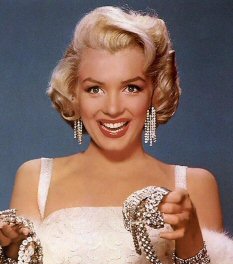 I really, really hate conspiracies. I just want to know. Ya know? Marilyn’s death remains surrounded in mystery. Did she overdose by accident, or on purpose? Or was she really snuffed by the Kennedys? No one will ever know, I guess. And it’s probably safe to assume that anyone who might have known took the story to his/her grave.

Anyway, it was on this day — 5 August — in 1962 that Marilyn Monroe was found dead in her bungalow.

Tomorrow marks the anniversary of the 1945 bombing of Hiroshima. I don’t think kids today (or even those of us born in the 50s and 60s) realize the true horror of a catastrophe of this magnitude. Honestly. And I’m tellin ya: controlling nukes owned by crazy people = herding cats. 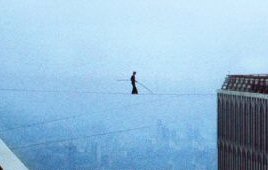 On the 7th is the anniversary of the foggy morning in 1974 when French athlete Philippe Petit illegally stepped out on a wire he and his mates strung between the two towers of the World Trade Center in New York. The Thriller and I finally got to see the movie about it, Man on Wire. You must see it to believe it.

The intrigue, blind faith, incredible audacity, celestial alignment and just plain dumb luck that combined to facilitate this stunt are simply not to be believed. Go rent this film today.

And on the very next day in the very same year (1974), Richard Nixon resigned the presidency. I vividly remember watching a replay of the announcement on the news the following evening, sitting with my dad in the living room. Another good movie: Frost/Nixon. We’ve seen it twice. Brilliant performances by Frank Langella as Nixon (he was nominated for an Oscar for the role) and Michael Sheen as David Frost.

Crazy days indeed. And now I’m off to my own crazy day. Ugh. Have a goody!