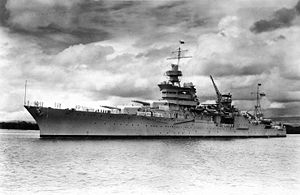 “So, eleven hundred men went in the water; three hundred sixteen men come out. The sharks took the rest.”

The above is a quote from the movie Jaws, when the character named Quint (played by actor Robert Shaw) told the tale of being on the USS Indianapolis during World War II. I don’t know how I ended up on this particular site, but last night I read about the torpedo sinking of the Indianapolis in 1945.

It is still considered the worst naval disaster in United States history.

The story wasn’t totally unfamiliar to me; I vaguely associated the Indianapolis with sharks. I knew that some of the men thrown into the water (and who languished, unrescued, for days) were eaten by sharks. The terror they must have felt is unimaginable. But even more amazing are the stories of the survivors.

One such story was told by Woody James. Read this if you have time today. It is a testament of the will to live finally winning over the desolation and horror of being left for dead, and watching (and hearing) your friends die around you.

Several twists make the story of the Indianapolis even more interesting. For instance, this was the ship that delivered the bomb that was dropped on Hiroshima to end the war. A Japanese sub destroyed the ship while it was on its way back home to prepare for a subsequent invasion of Japan…

Then there’s the story of the court-martial of the captain of the Indy, with survivors going to their graves swearing that it was the Navy — and not Capt. McVay — who disgraced the country with “conduct unbecoming.” McVay’s story (and you really must read it all) ended like so:

McVay was found guilty on the charge of failing to zigzag. The court sentenced him to lose 100 numbers in his temporary rank of Captain, and 100 numbers in his permanent rank of Commander, thus ruining his Navy career. In 1946, at the behest of Admiral Nimitz, who had become Chief of Naval Operations, Secretary Forrestal remitted [forgave] McVay’s sentence and restored him to duty. McVay served out his time in the New Orleans Naval District and retired in 1949 with the rank of Rear Admiral. He took his own life in 1968.

McVay’s experience parallels that of the only other naval captain to be court-martialed for decisions based on conditions beyond his control. William Turner, captain of the doomed RMS Lusitania, was also used as a scapegoat by his country’s navy.

The final oddity concerns the very person who yelled “Fire!” (in Japanese, of course) and caused the Indianapolis tragedy. He would return to the lives of the survivors in a strange and intensely personal way.

Every now and then, we need to be reminded of the bravery of people who did and saw things in the name of their country that you and I could likely never comprehend. And some, like McVay and Turner, endured humiliations perpetrated by their own governments that rivaled their suffering in battle. Take 30 minutes and read about their incredible courage. You won’t be sorry. In fact, you’ll be better for it. And smarter.