I am forever awed by stories of selfless bravery fueled by the love of one’s country, and incredible tales of survival in the face of impossible odds or the direst situations. That kind of courage/will/patriotism is somewhat rare nowadays, agreed? I like to write about those people. (If you’re curious and have the time, here’s Courage I.)

Do you know of anyone who would have entered Auschwitz – the largest and most inhumane of all the large and inhumane death camps of World War II – voluntarily? As I found out last night, there was just such a man. 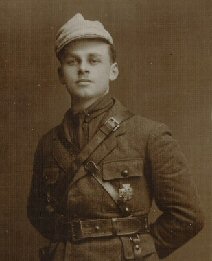 Witold Pilecki, an officer in the Polish army, willingly infiltrated Auschwitz, posing as a prisoner, in order to gather intelligence on the Nazis and to organize an uprising to free everyone from the camp. The SS had other plans, unfortunately.

His story is incredible — and sad. The tale can be read in many different places on the web, but a good composite location for the salient points is at a blog belonging to this Polish Canadian, who provides information gained from his own research of anecdotes and archived documents.

Auschwitz was bad enough for Pilecki, but he met his end, in a cruel twist of fate, at the hands of the Communists of his own country, who accused him of conspiracy. Quoting from the blog:

Witold Pilecki escaped from Auschwitz on the Easter Monday 1943, he also survived the Warsaw Uprising an[d] the German POW camp in Germany.

He returned to Poland after the war and started organizing resistance
against the communists. When he learnt that the Allies would not help to liberate Poland from the Soviets he started demobilizing the military underground organization.

It was then, that the communists arrested him.

He was interrogated and tortured for many months. His finger nails were pulled out and his collarbones broken and he could hardly walk. He never “talked.”

After his process, which was a simple farce, he was sentenced to death by a firing squad. There was no firing squad though. The executioners dragged him [to] the basement of the Security Headquarters building, into the boiler room. He was gagged and could not walk.

They shot him with a single slug into the back of his head. He was buried somewhere on the rubbish tip (landfill) next to the Powazki Cemetery. His body was never found.

I wonder why this guy isn’t ranked up there with Oskar Schindler, and people like these, who daily risked their own lives to save others — or for that matter, anyone who ever served in the military, and either stayed the course and lived to tell the tale, or died trying. When you read about guys who deserted the US Army and are now livin’ it up in Germany, it really puts things in perspective, doesn’t it?

Fink, enjoying the quiet, the coffee, and the 2-hour delay

Great post this morning! I love to hear the stories of the people that aren’t often heard, but deserve a voice in history. It does put things in perspective. That reminds me, I just finished a riveting book about a history that needs to be remembered, about the people who lived through the great dust bowl during the depression. I could not put the book down! It is titled The Worst Hard Time. Reading it makes it easy to see how complacent and comfortable our society has gotten, our younger generations growing up with nothing but abundance. And also how… Read more »

This man was a truly brave soldier and person. I don’t like the fact that he is lumped in with “all serving in the military” though. For the most part, people choose to be in the military as a career move. There are some individuals who join to fight for the cause, but there are just as many who view it as a stepping stone on to another level in their lives. I am good friends with a 102 year old woman (still alive) that survived a concentration camp and was able to escape to the United States because her… Read more »