1. I think I am the only high school choral director on earth who has never seen a single episode of Glee.

2. I’ve also never seen the Star Wars prequels. I dunno…it brought in a whole new cast of characters, and I guess I wasn’t ready to accept intruders. That, and I’m not sure I really embrace the whole “before they became who they were to become” thing. Prequels seemed to be the flavor of the week there for awhile in the 90s and early 2000s. There was a long time when I thought “prequel” was just a ridiculous word made up by the film industry so they could do more movies, beat more horses, push more brands, and generate more millions in revenue by inventing backstories after running out of forward stories. Silly Fink.

[I do know that the SW stories were complete before Lucas started production on the fourth book as the first movie, though.] 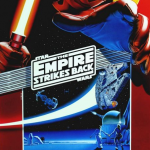 But I did see all the original three movies in the theater — a great experience. This one in particular had me riveted to my chair (while pregnant with Seamus and probably wolfing down popcorn) back in 1980. Do you believe The Empire Strikes Back is 30 years old? *sigh* Tempus fugit.

In fact, there are several movies that should never be remade. Lessee here, in no particular order…

What are your choices? What films should they never remake, or what films SHOULD be remade? I covet your thoughts this day.

3 thoughts on “Couple of confessions”