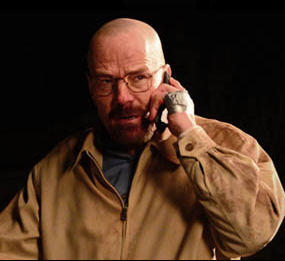 It’s been many, many years since I’ve been *this* caught up in a television show. Not only is Breaking Bad the absolute best-written show on TV — ever — but it’s getting unbelievable press from every possible source, with everyone from TV critics to celebrities to regular bloggers like me trying to predict what will happen in the two final episodes of the series (“all bad things must come to an end”).

Believe me, I’m depressed about that.

That’s why it is urgent that you watch this series. Good fiend and RtB commenter Tom Hanks said it best last night, and I will paraphrase: Breaking Bad is an American tragedy, and we don’t have too many of those. People are taken prisoner by both the horror and the truth of it; it’s probably the same effect that gripped those who first watched Shakespeare, 500 years ago.

I agree; and add to that the outstanding writing, featuring layers upon layers of signs, signals and subliminal import, and you have an all-too-rare instance of the perfect play. If Vince Gilligan and his team of writers don’t sweep the next Emmy ceremony, I will be shocked and dismayed.

Caveat: the show is not for watching with your kids. But you can’t be left behind on this. Get on Netflix (or whatever service, free or otherwise, that you can find) and start with the pilot, and binge-watch through all five seasons. You must. If you don’t, you’ll be one of the few who have missed the most important, shocking, outstanding storytelling in the history of the medium, seriously. And I’m not alone in that thinking.

So, assignment. If you haven’t started BB, start it. Soon. I promise that from the very first episode, you will be hooked — and outraged, and horrified, and transfixed.