When I was a kid watching primetime TV in the 60s and 70s, I cared about exactly two plot features: fantasy worlds where people had amazing powers, and cute guys. Not necessarily in that order. 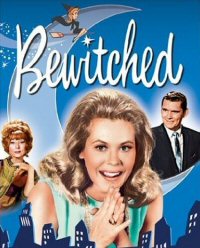 So it should come as no surprise that I loved these two shows. Still do, though I never get to see them anymore.

My favorite Bewitched characters were, of course, Samantha, and also the crazy Dr. Bombay. I even liked Endora, Samantha’s meddling mother.

I always enjoyed Elizabeth Montgomery as Sam, but I must say I was more than a little creeped out when I watched her several years later playing Lizzie Borden. Did I ever have nightmares after that, holy carp. It even scared me watching it ten minutes ago. 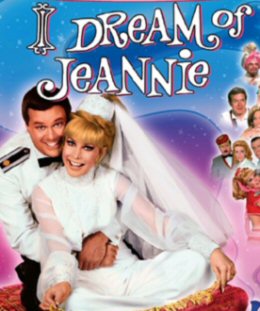 My other favorite magic show: I Dream of Jeannie. It held the double-whammy: magic, and Larry Hagman, who, in my estimation, was the one of the best comic actors on TV at that time. And don’t forget cute as a puppy. You just wanted to hug him and kiss him and squeeze and buy him a chew toy and take him home. (At least I wanted to when I was twelve.)

Ten years or so later, I changed my mind. Larry morphed from cute, long-suffering but still-happy Major Tony Nelson into nasty, greedy, mean-as-a-snake J.R. Ewing — even though he ended up getting what he deserved.

Anyone else watch these two shows? They are among my all-time favorites. That they both had dynamite theme songs was an added thumbs-up. They don’t write ’em like that anymore.

OK, time to make the donuts. Tempus fugit, et cetera. I command you to have a good Monday.

Fink, wiggling nose, disintegrating into a column of mist, and funneling into bottle *BiNg*

I had a serious crush on two TV/movie stars: Annette Funicello and Hayley Mills. I wrote fan letters to both and received back the usual “autographed” photos which I really treasured until my brother decided to draw a moustache on Annette in INK!! Annette, Hayley and I have grown older (especially THEM) and I have no idea where the fan photos went. Another local TV favorite was “Barnaby” who in reality was a native of Norwalk and went to school with my dad. I met Barnaby (Lynn Sheldon) a few times over the years and have his really autographed book.… Read more »

I watched both shows as a kid in the 1970s, but “I Dream of Jeannie” was my favorite by far. The reason was the talented and gorgeous Larry Hagman! He was my first crush. I still love him, so much so I created an entire web site about him!