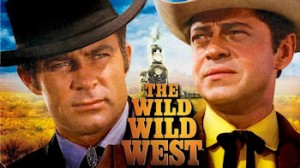 I don’t remember how I got to the Steampunkary site last night, but there you are. And of course, I can’t think of steampunk without thinking of one of my favorite shows from my youth: The Wild, Wild West. I thought Robert Conrad was completely dreamy. Well, that, and the sci-fi flavor made it exciting, and sometimes bizarre. Proof: one episode depicted Jim West (Conrad) having a dream. He went to a waterfront bar to meet a tipster. While there, he’s shot by a mermaid with a blowgun, and wakes up on a ship that’s sunk by an exploding dragon. When he returns, the bar doesn’t exist and he can’t prove anything. Talk about trying to convince the asylum you’re not crazy.

West’s faithful sidekick, Artemus Gordon, was the comic relief, and the pair had the glamorous job of spying on bad guys for president Ulysses Grant during the Civil War. By all comparisons, it was a 19th-century cocktail of James Bond and Batman & Robin, complete with fancy techno-gadgets (fancy for the 1860s, anyway), plenty of criminals gettin’ what’s comin’ to ’em, and West getting the girl. There was always a flavor of the week.

Some neat-o facts, many of which I did not know:

I also loved the opening animated sequence and theme song.

One thing’s for sure. The movie ain’t the series. Ick. And yes, I’m one of those die-hards who just couldn’t make the jump from Robert Conrad to Will Smith. No comparison in my old, musty book.

Hey, is it Monday already? Yipes. Time to pound feet on the basement floor. Yay.