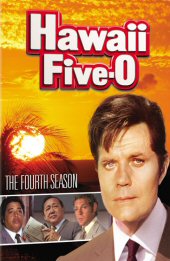 Now how great is this? Remember Jack Lord in Hawaii Five-0, saying that famous line after narrating the next episode’s preview trailer?

I had completely forgotten about Five-0. Mavis and I watched it pretty regularly growing up, as I recall. Although it wasn’t one of my all-time faves, I did enjoy watching it to see dreamy James MacArthur. Jack Lord (pictured at left) never really did much for me; I suppose I thought he was “old.” What was he, probably 40? 45? Feh. A mere pup.

This morning I happened to notice a link to an article about the return of Hawaii Five-0. So I did some cursory searching (as you do), and found a slew of Jack Lord/H50 sites — a veritable cult following, complete with photos, interviews, stories, obituaries, and, unfortunately, the dreaded monstrosity known as fan fiction. (Hork.)

Remember Kono, the big Hawaiian detective played by a guy named Zulu? I was intrigued by people who had only one name (gimme a break, I was twelve).

Another interesting fact: the show caused a skyrocket in Hawaii tourism. I had no idea. I wonder why its predecessor, Hawaiian Eye, didn’t have that effect. Hawaiian Eye was a little bit before my time, but I totally remember the opening sequence. And Robert Conrad was totally dreamy.