Yep, ‘fraid so. This rat packs. Waaay too much, in fact. And last night, I received a packrat’s dream gift: stuff.

Miss Kitty, BFF Kay’s mother and a sweet, sweet lady until her passing coming up on one year ago, was a fellow rat packer. I mean, pack ratter. I mean, she was just like me. She kept stuff.

Now you might not think it’s cool, and that’s all right. That’s the way we p-rats roll: we keep what *we* think is cool. And this, I must admit, is downright frosty. Behold: 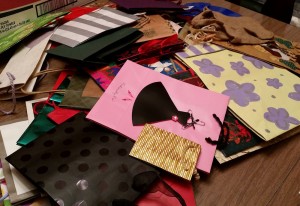 What’s that pile of garbage, you ask? Why, it’s 44 gift bags, all in pristine condition, dating back probably 20 years. She received a gift, and boxed the bag. Received a gift, boxed the bag. Received a gift…you get the idea. I recognized the yellow one with the purple flowers and stripes; it contained a gift we gave her several years ago. And who knows how many bags were lost along the way. Still — they’re all mine, and I will pack them away until the next birthday, baby shower or Christmas event. After all, it’s worth the pack-ratting if the stuff has an eventual purpose, right? Of course right.

A bit on the funnier side was the other half of this booty. Some may think it strange, but knowing that Miss Kitty was born in 1925 and lived through the Great Depression brings much of this behavior into better focus. Here is a small sampling of the wrapping paper — some intact in its packaging, but most just random scraps — I inherited last night: 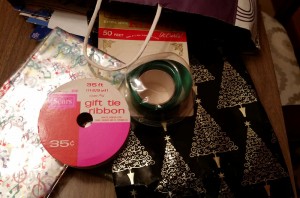 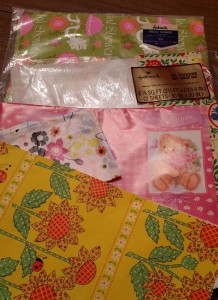 And we’re talking hundreds of scrap pieces, many looking like they’re from the 1970s. It’s awesome. And little jewelry boxes? Likely a dozen of those, in all shapes and sizes. Even some gift bows, sticky name tags, and partial rolls of ribbon. And they’re all my preciouses. As soon as I feed the three hungry dogs at my feet, I plan to go into the dining room and arrange the bounty in one box, and have the Thriller store it in the basement utility room.

I love things and stuff, don’t you?

8 thoughts on “Confessions of a Packrat”