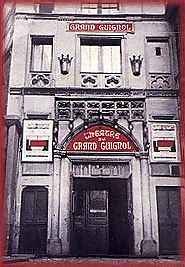 Grand Guignol (let’s first get the French right: it’s pronounced “grawn geen-yol”) was the name given to a type of play performed in Paris, beginning around the turn of the 20th century. Its creator, a controversial playwright named Menetier, bought an old chapel and converted it into a theater where he could freely show his works, which often depicted the dregs of society doing scandalous things. He eventually sold the theater to another guy, who decided to convert the Theatre du Grand Guignol into a horror palace. 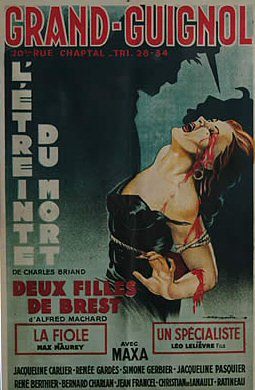 The plays got increasingly macabre and violent. More and more liberties were taken to see just how realistic a murder scene could become. Grand Guignol was in its heyday, and the theater often attracted the high society of Paris, as well as its share of tourists — all of them looking for the ultimate gross-out. They got it. The actual plot of the story didn’t seem to matter, as long as it was gruesome, bloody and realistic.

It had the desired effect, too. In his book, The Grand Guignol: Theatre of Fear and Terror, Mel Gordon says:

At one performance, six people passed out when an actress, whose eyeball was just gouged out, re-entered the stage, revealing a gooey, blood-encrusted hole in her skull. Backstage, the actors themselves calculated their success according to the evening’s faintings. During one play that ended with a realistic blood transfusion, a record was set: fifteen playgoers had lost consciousness. Between sketches, the cobble-stoned alley outside the theatre was frequented by hyperventilating couples and vomiting individuals.

The GG eventually died out in the 1960s, but it’s enjoying a renaissance out in San Francisco right now.

Indeed, the effect of Grand Guignol on mainstream film was felt long before Burton’s Sweeney Todd – many times throughout the 50s and 60s, most notably. 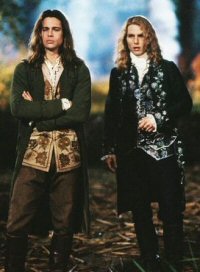 But hey, remember the movie, Interview With the Vampire ? It’s based on one of my all-time favorite series of novels (The Vampire Chronicles by Anne Rice). Here’s the original trailer for the 1994 film, starring Tom Cruise. Brad Pitt was in it too, and it also featured a very young Kirsten Dunst. I loved it. Anyway, in that movie, there is a scene in which the vampires of Paris put on a play in the Théâtre des Vampires — a takeoff on the Grand Guignol Theatre.

The only difference, of course, was that in the play they performed, the audience had the unfortunate experience of slowly realizing that the human sacrifice depicted onstage was, in fact, quite real…

So rent Interview this weekend and watch it with your hunny. I might blow the dust off my VHS copy of it and share a cinematic memory of days gone by, when Tom Cruise was actually *not* a wackjob.