Well, fiends, we made it. Winding “from Chicago to LA, more than two thousand miles all the way” — it was a kick for sure.

On the 4-hour drive through the High Desert from Needles to San Bernardino, we took the Old Road several times. [For those arriving late, Historic 66 mostly runs alongside the interstate, often veering off in other directions, crossing the interstate back and forth, or disappearing altogether for miles at a time. It’s a challenge to find it sometimes, even with road signs and guidebooks/maps.] Our first stop was Ludlow, where we went to the Dairy Queen — one of exactly two functioning establishments in town — to get an ice cream cone. The rest of Ludlow went the way of many other 66 towns across the country on some level: 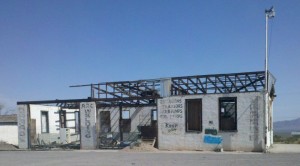 Fortunately, the Ludlow Cafe and Motel are still going strong: 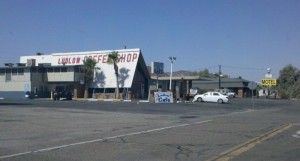 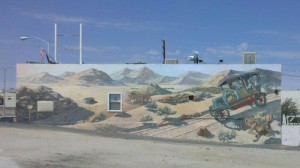 Next in our path was Barstow. Once again, our car conversation turned to the absolutely mind-boggling number of “motor court” motels we’d seen along the way. How I wished at that moment that I’d counted them all. I can’t imagine how many hundreds there were and are.

Barstow embraces its Route 66 history. This mural is one of several in the town. And we counted at least ten motor court motels — most with original signage still in place — on the short main drag.

Then it was off to Victorville, known not only as a Route 66 tourist stop, but as a destination for violent criminals nationwide. [We didn’t see the prison.] Victorville restored some of its original charm in a special district, with shops, motels and cafes along the way. Definitely one of the most well-maintained 66 stops we saw in the southwest.

Then we arrived at our destination — the Wigwam! [Again, email me if you are not on Facebook and would like to see all the photos of the Odyssey. I’ll send you a private link.] The only bummer — no AMC, and the wrong HBO. Therefore, no Mad Men, no True Blood. But it’s OK. Really. I’m fine. Seriously.

We checked into the Wigwam, went to IHOP for some flapjacks, then took off for the Santa Monica Pier, where 66 officially ends. I saw the Pacific Ocean for the first time — it was gorgeous.

And there you have it.

Now for the second phase of the trip — the Road Home. We start with a 3.5-hour drive to Las Vegas, where we’ll relax and have some casino fun for two days. More later from the Orleans, fiends — and thank you for sticking with me for this leg of the journey. I feel like we’ve had the company of people who were almost as excited as we were about this endeavor. You are all the beast.

I’ve enjoyed seeing all your pics and imagining you and the Thriller living it up. It’s fun to vacation vicariously through y’all, LOL! The motor court motels are cool. Were any of them still operating as motels? My dad’s eccentric mechanic owns an old motor court motel that he converted to a resting place for European classic cars. All the rooms are parts storage. It’s very odd, needless to say. And isn’t the Pacific ocean absolutely beautiful? Sorry to hear about the Madmen! Would you like us to DVR it for you; it’s playing again later on today I see.… Read more »

Congrats! You’ve made it all the way to the Pacific! Quite a sight! Isn’t it vast! I’ve really enjoyed your travelogue, both verbal and pictorial. I’m thrilled that you’re having a great time and a well earned tremendous vacation. While your exploring Rt. 66 et al, we’ve made a small trip to Hoosier country to see family — a son and his tribe (they now have 5 kids) and my mother. But we’ll be home before you are. Continued safe travels to you. ReplyRat Fink Reply:July 28th, 2010 at 9:10 amThanks, pal! The Pacific is indeed a sight to behold.… Read more »

I’ve definitely enjoyed your vacation! Now…. I’m not trying to be rude…. but if you could come home sometime, that’d be excellent. Much to discuss, we have. Especially if myself and the hub find ourselves moving to Ashland like… soon. Like. Very soon. It’ll be grand, I feel, for Heffe and I to escape from S-Land. Maybe better all-around. We’ll talk soon. Enjoy gambling. ReplyRat Fink Reply:July 28th, 2010 at 9:12 amWhat’s all this? What’s all this? Moving to A-town? We must chat! In fact, I might text/call while relaxing at my mom-in-law’s lakefront home. Must hear updates! And no… Read more »