Trees, trees and more trees. Big trees. Reeeeallly big trees. I think that on this journey, I’ve seen a trillion trees, no lie, but none so lovely as the mighty Coastal Redwoods. 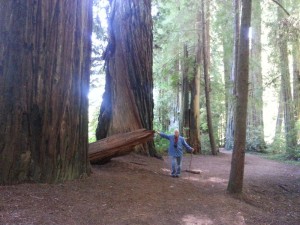 The Thriller with his Gandalf walking stick, next to a fallen redwood fragment

Jedidiah Smith State Park is just six miles up the road from our hotel, so we spent several hours yesterday hiking the groves of these magnificent giants. We took so many photos, it’s hard to narrow them down to four or five to show you here.

We learned from a ranger that the state and national park services combined a while back to save the redwoods, when California was in its most dire financial straits. It’s a very nice setup now, and we took advantage of the well-maintained trails. 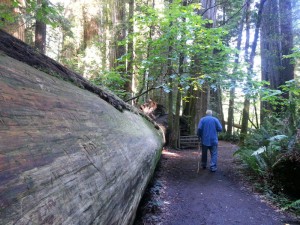 I’d hate to have been nearby when this one fell

The Thriller has uploaded many different pictures to Facebook, but here are some from my phone. It’s hard to wrap your brain around the sheer size of these monsters, so having bodies in front of them helps with perspective.

We didn’t see any wildlife along the trails, except for one species, and from what we learned, it’s among the most important in the forest. I got up-close and personal with the banana slug, who has reached an agreement with the redwoods: you give me the moisture my skin needs to thrive, and I won’t eat any redwood seedlings, but rather forage for stuff that competes with the redwoods’ survival. How cool is that? Mmm, slimy… 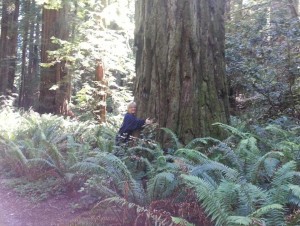 C’mere, you. Give us a squeeze.

It was a beautiful day for hiking (and hugging). Sixty-seven degrees outside, and no end to the sunshine — unlike the weather I heard we have back home, yikes! (BalloonFest getting rained on? Terrible.) My tree pictures suggest an overcast day, but that just shows how much light these 300-foot-tall drinks of water filter out when they stand together. Amazing experience.

After the trees, we headed back to Crescent City to take in the seaside. 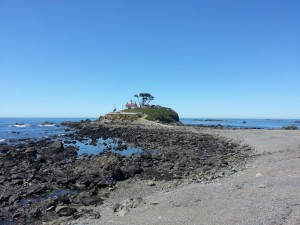 Crescent City is a working harbor town, right on the Pacific shore. There is a functioning lighthouse, which we visited at low tide. Really pretty, and of course, on a hill, so by the time we made the huge climb, we both felt like we were walking on our tongues. But worth the effort. What wasn’t worth it was waiting for the next group tour through the lighthouse, where no photographs were allowed. Psh. Take that. 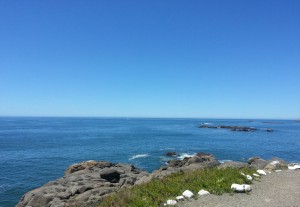 The beautiful blue of the Pacific was mesmerizing, and we stood for a long time on a jetty and admired it. But since it was low tide, and all sorts of slimy sea life and dead things barnacled to rocks were smelling up the shoreline, we didn’t stay as long as we would have liked.

After the day of hiking and hiking, we both had worked up quite the appetite. So we had a late picnic lunch back in the park, inside one of these weird looking tipi things that actually provided decent shade.

The evening was filled with laundry and relaxing. I watched Love in the Time of Cholera, with Javier Bardem. It was…well, nice. Anyway, it was good to just hang out for the night. The Thriller got on Facebook, read up about our next stop, and took care of some business from home.

Today, more California fun as we make our way to the Featherbed Railroad Bed and Breakfast, in Nice. What a cool name for a city: Nice. Nice!