…this world was never meant for one as beautiful as you.

I love that song. One of the all-time best songs of the seventies. If you don’t know it, you have to listen/watch. It’s an emergency. 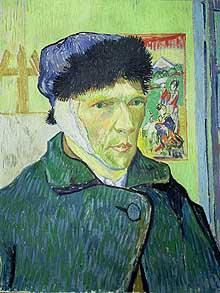 Self Portrait with Bandaged Ear, 1889 by Vincent van Gogh (1853-90)
This morning I caught a link to “This Day in History.” I found out through more searching that Vincent van Gogh did not in fact “chop off his own ear.” First, it wasn’t his whole ear, but rather just a small part of the lobe. And according to NPR, the police report of the incident suggested a fight with fellow artist Paul Gauguin, who was living with him at the time of the December 23rd, 1888 event.

It’s no secret van Gogh had his demons. They eventually cornered him into shooting himself in the chest, making a wound that would kill him a couple of days later. But what’s the scoop on this ear thing? I always assumed (read: believed what I’d read for decades) that he’d done the deed to himself in a rage of despair after Gauguin walked out on him. But according to a new study, reported by the London Telegraph:

Gauguin, an excellent fencer, was planning to leave Van Gogh’s “Yellow House” in Arles, southwestern France, after an unhappy stay.

He had walked out of the house with his baggage and his trusty épée in hand, but was followed by the troubled Van Gogh, who had earlier thrown a glass at him.

As the pair approached a bordello, their row intensified, and Gauguin cut off Van Gogh’s left earlobe with his sword – either in anger or self-defence.”

Muy interesante. Who says you don’t learn anything on the Interwebnet?

Got all your shopping done?

I too have always loved that song. Its haunting melody and lyrics have always mesmerized me. Of course, back in high school I had no idea what the song was about.

I once saw a one-man play about Van Gogh. . . .he was such a tortured soul. I believe he had a brother who tried to help him with his emotional troubles and finances. I remember this song was part of the production.

I know we’ve had this discussion before, but doesn’t it seem like the truly gifted ones are the most tortured? I have no idea the real reason, other than the creative muse can also function as a demon.

Have a great Christmas with your fam…I’m off to Detroit on Friday — I’ll leave the lights on for ya!

Have always loved Don McLean and this song is among my top 5 from him. Guess that shows my age *sigh*. Yes, haunting and beautiful – kind of like Van Gogh’s art. Wondering if there was any evidence that he and Gauguin were lovers? That would place a lot of puzzle pieces in my mind. Took me a minute or two to figure out why, if his left ear was injured, the bandage on the painting shows the bandage on the right ear? He must have painted it from a mirror image, no? Glad you’re up and about a bit… Read more »

I have always loved “Starry Starry Night” more than “American Pie.” Both are testament to McLean’s amazing storytelling, though.

How cool you get to split and have some Christmas cheer with your family in the desert! I’d *have* to be in a coma to get on a plane, as you know.

I like that song too, haven’t heard it in a long time. A few years ago we went to the Van Gogh museum in Amsterdam. I am not much of an art museum kind of gal but I thoroughly enjoyed it. They had Van Gogh’s paintings hung in a large room, beginning with his earlier works when he lived here in Holland and then his later paintings in France. The ones that he did while living here were quite dark and somber (as it can be here!!) and the paintings done when he was in France were quite colorful. You… Read more »