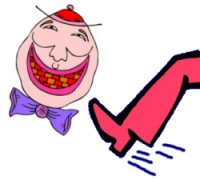 Welllllll, there are plenty of Boots to the Head to give out today.

First — it’s blowing up Twitter and Facebook. After George Zimmerman goes free after killing a kid, Marissa gets the book right in the face. BOOT to the head of that judge.

Second — I belong to a Facebook group called “Badass Teachers Association.” (Sorry if the title offends. They said that they previously were called “Dump [US Sec. of Educ. Arne] Duncan,” but they could only get 1,000 members. The “BATs” now have over 22,000 members. Names matter.) It’s basically a fantastic bunch, dedicated to the repeal of the Common Core in the high-stakes testing debacle in this country, financed by billionaires who’ve never taught a day in their lives, and who think (moronically) that a school should be run just like a business. Anyway, as I feared, it is filling up with whiny crybabies who give the bad guys TONS of ammo against teachers. Shut up already. BOOT.

Third — I’m in a sour mood today, and I hate it. Someone make me laff!!

Fink out (of sorts)