One person complained, so the Kewaunee School District in Wisconsin changed their mascot name from the Indians to the Storm. Rather than risk an expensive lawsuit, they capitulated. What’s the country coming to, luvs? I am of Irish and Scottish descent. Shall I take on Notre Dame and the College of Wooster? Surely a shillelagh-brandishing leprechaun or a man in a kilt holding a shield and swinging a sword in a murderous fashion would offend someone, somewhere.

I’d be more offended by these mascot names.

While showing some restraint due to my circumstances, I will go out on a limb and state that Americans are becoming a nation of tattle-tales and boo-hooers. Did it never occur to the woman in Wisconsin who complained about the “Indians” name that the moniker might be a tribute and not a slight? According to Jacqueline Johnson, of the National Congress of American Indians, the problem lies in the complete inaccuracy of most representations by sports teams:

“You’ll see icons or pictures that are not reflective of the people or cultures,” she says. “They become caricatures, and that’s offensive in itself, as it would be to any other race if they were caricatured.”

So, what she’s saying is that most Americans are apparently too shallow and ignorant to see a caricature as a caricature. (Definition of caricature: A representation in which the subject’s distinctive features are deliberately exaggerated to produce a comic effect.) Welp, if caricatures are Big Bads, that takes out the mascot for the Providence Friars, the Pittsburgh Steelers, the Purdue Boilermakers, and countless other icons that, while not depicting race  per se, definitely signify personal identity. 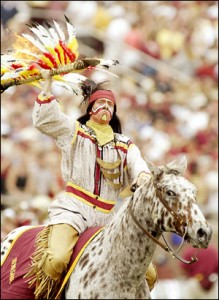 Florida State Seminoles
And I ask you, honestly: what is not reflective about the Seminoles mascot? Does this not suggest honor, dignity, power and realism? What could possibly be bad about that? Look at any photo gallery from Native American powwows, and you’ll see that this is an accurate representation. So what if some mascots are cutesy or silly? Are we to clutch the pearls and gasp at every cartoony logo? I mean, if we’re going that far, we may as well petition the ACLU to force Congress to outlaw all satire. What’s good for one is good for all. If you can’t take a joke, there’ll be no joking.

Does the Notre Dame mascot caricature offend me, an Irish American descendant? Heck no. I can see it for what it is. No one is making a hateful statement about a persecuted race. (And don’t tell me that the Irish were not disenfranchised in America years ago.)

I guess I’m personally offended because I consider myself extremely attuned to the past and present plight of the Native Americans. And I’ll go you one further (and this may make me a pariah in some circles): some of the same people who take offense to Chief Wahoo have no problem at all with defacing, burning and even urinating on the American flag, the quintessential symbol of American freedom for which many died, labeling it “art.” But anyone who opposes that behavior is called out as a bigot or nutjob or enemy of personal freedom of expression.

BOOT to the head.

On a completely unrelated, but important, note — John Lennon would have been 70 today. Wow…

Happy weekend, fiends! Alas, I’m off to rehearsal all the live-long day.

My high school mascot was the Monsoon. If that wasn’t weird enough, the mascot from SU was an Orange. A mighty windstorm I can see, but a fruit?!?!?? *sigh* I thought a mascot was supposed to make the opponent fearful. No wonder SU never shows up anywhere in any finals. (2003 was a fluke, people – an anomaly. Lightening strikes more often than you’ll see that happen.). The SU mascot just doesn’t make any sense. Syracuse (aka Siberia-cuse) does NOT produce oranges, which will not grow in the NY state snow belt. All Syracuse does produce is smart alecks like… Read more »

Yeah, what’s with the Orangemen? I wondered that as soon as I read your reply, so I researched it. Interesting. And I didn’t know you were a Syracuse grad! Does that make you a Lady Orangeman?

Me, along with Dick Clark and Whitney Houston, although Whitney never graduated.

You know I agree with you… but the Cleveland Indians partially caved due to criticism. Hence: “Slider”, The Oddly-colored, Pear-shaped alien from another world that has no significance but to allow a few people their “day” in the spotlight. It is no longer the day with the wigwam in the cheap, bleacher seats like in “Major League” banging on loud bass drums and wearing traditional head-dresses and makeup. It’s “Slider” country now. Why? I have learned in my short time on this earth that there is always someone to offend. But in a country where the minority opinion, whatever that… Read more »

Slider is an embarrassment to every Tribe fan. The end.

(And I’m totally up for tea, neighby!)

Side note: How can you be offended by Chief Wahoo? I mean, really. He doesn’t exactly strike fear into the hearts of opponents.. and it’s not like he has an angry face and blood dripping from his grin. PFFT………

Agreed! I feel the same way about the Miami Dolphins. OoOooooO SCARY FISHY

I think defacing the flag as an individual for the sake of art or protest is different than an organization like the Cleveland Indians using and profiting off of a racist caricature. I’m with you on the Seminoles thing. Something that pays tribute to Native Americans and serves as a remembrance should be alright, but I don’t think “Chief Wahoo” fits that. http://images.picturesdepot.com/photo/c/cleveland_indians_racist-19414.gif If the majority of Irish Americans were against the “Fighting Irish” logo I’m sure it would be gotten rid of. I don’t think the experiences are directly comparable though…Irish people were disenfranchised but not subject to genocide.… Read more »

If the majority of Irish Americans were against the ND logo, they’d probably shut up about it. First – they’re not a recognized “minority” — they have no special rights under the law. Second – how thin a skin do we have to have in this country? My point is if we’re going to outlaw Chief Wahoo because it supposedly degrades Native Americans, then we may as well outlaw Elmer Fudd because he makes white people look like buffoons. And while we’re at it, get rid of and Beavis & Butthead and the entire friggin cast of Family Guy. Why… Read more »

I don’t think use of caricature is directly comparable from culture to culture. I think doing caricatures of minority populations is different because of historically racist use of similar caricatures in the past to belittle and mock the people of those races. If white people don’t mind being caricatured it is probably because there is nothing in their history to make them sensitive to that kind of thing. If another race does find it offensive I don’t see any reason why it should be continued. I’ve not seen the shows you mention but I doubt they are making white people… Read more »