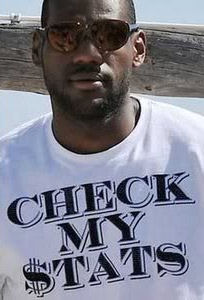 Well isn’t this just spectacular. Just when you think the LeBron madness couldn’t get anymore ridiculous, there’s this. Can it just please go away?

Here’s the biggest mistake many Cavs fans made: believing that James cares about them, and “HOME” (I saw the billboards in Cleveland the other day) and loyalty and bringing a pro sports championship of any kind to the state of Ohio. If he chooses to stay in Cleveland, it won’t be because of any of that. His behavior since February is proof positive of it, and this new insanity on ESPN drives the nail in for good. I mean really, since they’ve promised not to drag out the wait time for the announcement past ten minutes, how long will it take him to actually phonate where he’s going? Five seconds? How long does saying a city name like Cleveland, Chicago, Miami, East Rutherford or New York take?

The only ratings jump will be in the first ten minutes. After that, I’d bet that most of the fans in the aforementioned cities — with the exception of the one named by LeBron — will tune out. Idiotic.

LeBron James, his handlers and ESPN: BTTH. But this article — awesome. Haha. Yay for 20/20 perspective when needed.

While flipping channels before bedtime last night, I came across this gem: Toddlers and Tiaras on TLC. In addition to illustrating the immeasurable lengths asinine maternal units will span in order to live vicariously through their poor daughters, this show reminded me of the old car accident saying: it’s horrifying, but you can’t look away.

Some of the cuter quotes I remember:

Mom #1, hissing in a whisper to her 4-year-old who didn’t want to wear a gargantuan wig onstage: “If you don’t wear the wig, you won’t win the Crown of Royalty!”

Mom #3, in a startling moment of honesty: “I’m certain it’s more about what I want than what she wants.”

Fantastic. And there was so much more — not to mention the fact that people actually have pictures made of their 6-year-old daughters to look like this. No joke. That’s Regan — a real little girl. It’d be interesting to see how many pedophiles have these pageant sites bookmarked.

Child pageants, everyone who runs them, and especially the parents who exploit their kids in them: BTTH.

Children that age should be at the park, playing hide-and-seek in the big plastic tunnel.

This whole LeBron thing is making me nuts. He’s an overpaid Michael Jordon wannabe. He will never be MJ, or have the class. I think he’s getting off on being able to bring an entire city (Cleveland) to its knees! All of those people are sheep. Sad, mislead sheep. Even our local station (ABC, channel 5) refuses to utter a disparaging word about this guy. The other stations are reporting how some fans are sick of him and think he should be shown the back door of the city and have it slammed in his face! I’m PRAYING that he… Read more »

Haha — yep, Mave. Truthfully — he always said he didn’t have any “help” in Cleveland. Well what about the crazy W/L record in the regular season? He had help getting all those games won. Why all of a sudden, when the playoffs come around, he “has no help” ?? I’m sure there are lots of people in Cleveland who were afraid to say anything negative about LBJ for fear he’d take offense and leave. It’s those folks (the sheep you referred to) who are truly fooled. Brother doesn’t care about them, what they think, how much money they spend… Read more »

YAY!!!!! I just heard he’s going to Miami!!!!! Good riddance to bad rubbish. I totally agree with your reply, sweets. He let all those people in Cleveland march with banners supporting the “King”… Asking (begging, actually) that he stay here in Cleveland. Well fans – he just kicked you all in the teeth. There’s your King, for ya. He just threw all of them to the dogs and he doesn’t care at all.