Michelle Obama’s campaign to kick childhood obesity is getting revved up (I think I like this First Lady “cause” the best out of all of them in recent years), receiving top-level press and visibility. Jamie Oliver, a chef from a country definitely not known for its healthy cuisine either, is beginning to make a difference in some US cities (and I hope it turns into a tidal wave of change), and the Healthy Schools Campaign in Chicago is starting a trend for the millions of children at risk for obesity and its related dangers.

Then KFC comes out with a new sandwich. 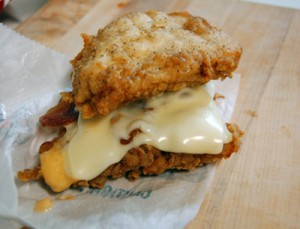 Today’s boot goes to the “Double Down” — what better way to complement the aforementioned healthy eating campaigns than to introduce “food” that’ll have microscopic beavers building dams in your major arteries faster’n you can say atherosclerosis?

I mean, listen. I’ll eat the occasional Fluffernutter, and I do like having a decadent treat once in awhile, or celebrating on a special day. But this is an affront to anyone who’s ever cared a minute about his or her health in the slightest. Who needs bread when ya got two pieces-a fried chicken you can slap together around bacon, cheese and goo? How delightfully American.

Anyway, BOOT to the head for them. Trying to eat healthy is hard enough on everyone. And don’t even get me started on the food in my school cafeteria…