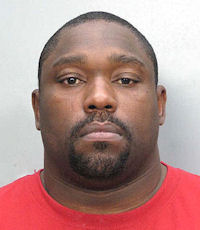 “I was trying to help her up and she fell on her leg.”

Of course she did, dear.

And so it goes: another pro athlete arrested for stupid behavior that threatens an otherwise entitled and charmed life. Some people can’t see how fortunate they are. The man is blessed with tackling talent that eventually gives him an embarrassment of riches. After retirement from the NFL, he is paid handsomely to hang around the sidelines and give his opinion on stuff. Difficult job.

It’s a cruel statement, “You can take the boy out of the ghetto, but you can’t take the ghetto out of the boy.” Yet it’s been proven over and over again in pro sports — especially the NBA and NFL. Fortunately, these jokers seem to be in the minority; most pro athletes make it through their careers without spending a single night in jail. Imagine that.

And then there’s the ubiquitous shirking of any blame whatsoever. Why do they do this so consistently? Because they get away with it so frequently. Why take the blame when you can successfully point the finger at someone or something else? Sapp will plead innocent, even if they send him to jail (which they won’t). It’s *always* somebody else’s fault. And even though the truth — either hard or circumstantial — will stare the judges right in the face, they will slap little Warren with an earth-shattering punishment by fining him and sending him back to his “job” on the NFL network for seven figures, so, you know, we can repeat this scenario in five years or so and go through the same process with the same result.

And the sad part is, it’s not limited to pro sports. But don’t get me started on that. I’m actually in a good mood today.