Hey, let’s add some guitars playing power chords to Debussy’s Prelude to the Afternoon of a Faun. Man it up a little. Heck, add on a couple strippers too, cuz, you know, we want guys to buy symphony tickets. 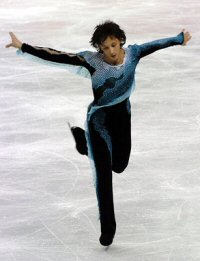 Seems SC wants to toughen up men’s figure skating. Because, you know, we can’t have all them girly-men doing pirouettes and wearing sequins. They must all be gay.

See, this infuriates me on several levels. What’s this all about anyway? I mean really? It’s about television ratings, fiends. Canadian dollars. The Skate Canada people say that fewer men are entering the field of competitive figure skating because of the stereotype attached to it (this is especially touchy for Canada, I’d imagine, given their national, manly sport of ice hockey). Well that’s too bad. Maybe Skate Canada should embark on a massive education initiative, instead of proposing what amounts to simple caving under pressure, or worse: chasing the dollar at any cost.

It seems like a real Pandora’s Box grand opening. So what happens now? If you’re a male skater and you don’t choose the “Tough” program, but rather, you choose the pairs skating or more “artistic” side of the sport — what, you’re a nancy boy now? What happens then? I mean, really. If you want to add another dimension to your sport, then add it. But do it for the right reasons; not because you’re being called “sissy.”

But listen. I ain’t no Mother Teresa. Everybody got a stereotype or two in their closet. I do, I admit it. My worst one: men and earrings. I hate earrings on men, in any form, single or double, small or large, hoop or cross or stud. Period. Why? Not because of sexual orientation connections, but because I equate the earring-clad male with a late-1970s lounge lizard.

Yes, I confess. I believe that every man who wears an earring is Nick Winters.

Bottom line, I mean, who cares anyway? I think it is positively laughable that people to whom this matters would flock to the symphony hall to listen to Tchaikovsky, Bernstein or Copland (and many others) and not know or think a thing about it. It makes me laugh at all the tough guys who watched — and identified with — Rock Hudson’s and Van Johnson’s movies back in the day and didn’t know.

Regardless of your personal/religious/moral views, fiends: it just doesn’t matter. I know gay people who are amazing musicians. I also know gay bankers, teachers, coaches (*GASP*), attorneys, cost accountants, corporate training execs and project managers, whose work is indistinguishable from that of their hetero counterparts. Why does everything have to be about orientation?

Hey, I have an idea. Let’s make everything about how nice you are. If you’re a schmuck — *bANg*. You’re out. If you have fun at other people’s expense because it makes you feel superior — *bANg*. Boot to the head. If you constantly drag down the people around you with your horrible attitude — *bANg*. We shun you. If you don’t treat others as you want to be treated — *bANg*. We stereotype you, look down on you, and invalidate you.