I try to be nice. I try to be open-minded. I make it my business to stop and consider a divergent opinion before deciding to agree or disagree. I have even paused before passing any kind of judgment on spoiled-brat, selfish, filthy rich athletes (I am sorry, but nobody is worth $25M a year to swing a ball bat) who wear entitlement like a big fat badge.

But I am now officially at the end of my tether. 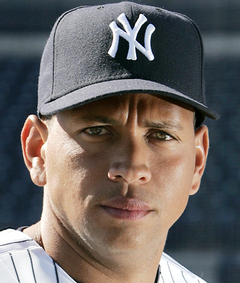 “When I arrived in Texas in 2001, I felt an enormous amount of pressure. I felt like I had all the weight of the world on top of me and I needed to perform, and perform at a high level every day…”

Mm-hm. Yep. And your point?

This is getting ridiculous. Remember back in the early 80s, when there was an absolute bank-run on the insanity defense in American courts? Seemed like every ax murderer and rapist out there either said, “The devil made me do it,” or gave Academy Award performances on the witness stand in attempts to channel Charlie Manson.

Well, I’m starting to see the same trend. I call it the “Young and Stupid” defense.

When have so many gotten so caught and had so few legitimate excuses? What to do then? Ah…look as meek as possible and say, “I’m ashamed. I was under pressure. I was Young and Stupid.”

Tell it to the judge, Alex. You weren’t Young and Stupid. You were Arrogant and Greedy. Sorry, fiends, but I believe (and I’m not alone) that had the news of A-Rod’s steroid use not come to light, he would have never ever ever in his long-legged life admitted to it. I mean, maybe I wouldn’t have, either. But like my mother always said, “A lie will follow you around, and one day, the truth will probably come out.”

Oh, but then I could plead Young & Stupid. Hmmm…..

I want a donut. A stop by Hawkins Bakery this morning, mayhap? I think so.

You know what… I’m going to take a different angle on this. (Although, maybe it’s my stomach talking.) In 2003, when these tests were performed, those found with positive tests were not to be charged with anything. In other words, it wasn’t illegal to have a positive test. 104 players were found to be positive on the steroids testing done that year. That was 8% of the league. (All players were tested at some point in time during that season.) Is it a surprise that A-Rod is one of them? NO! What about the other 103 people who refuse to… Read more »

That’s not my point. Long before 2003, performance-enhancing pharmaceuticals were at least unlawful, and most importantly, detrimental to an athlete’s health. And the fact that it wasn’t a “sanctionable” substance back in 2003 is just arguing semantics. Lyle Alzado died in 1992. The research is out there, and has been for years. These guys knew it, but they rolled the dice anyway. Nobody was “young and stupid.” He said it himself — he was under “intense pressure to perform.” That, in my opinion, slaps in the face every other person who is also under “intense pressure to perform,” but instead… Read more »

This is true. I just don’t like that A-Rod is the cover boy for this because he admitted to it when there are 103 other baseball players out there that are lying about it openly.

I understand where A-Rod is coming from on the whole “young and stupid” thing. Sometimes when you’re young you do really dumb things for no apparent reason… like wearing a brown/orange/red plaid suit jacket, terrorizing gym classes, or completely screwing up a DT audition. Those are all just made up random examples, mind you… just came up with those RANDOM examples off the top of my head.

P.S. I have long since apologized to Mrs. Hicks for being such a terrible child.

Kodye — I’m sure Mrs. Hicks accepts your apology (although I do remember her exasperation with you — it was classic).

And no one was more depressed about your screwed-up DT audition than your director. Hand to God.

As for the suit jacket, I remember it well. That wasn’t young and stupid — that was trend-setting. Downright smart!

“Enormous pressure”?!?!? “World on my shoulders”?!?!? Anybody hear a baby crying? Since when does playing baseball for a living (emphasis on the word ‘playing’, versus ‘working’ like the rest of us poor people) constitute having the world on one’s shoulders? Take the worst athlete on his/her worst day in any league, any sport. Did anyone die because of the athlete’s poor performance? Did the world come to an end because he missed the catch or was second in the race? Now take the best athlete on his/her best day in any league, any sport. Was a cure found for cancer… Read more »