So I was sitting at the box last night, catching up on some emails. The Thriller came up from his office and asked, “Will it bother you if I turn on the TV?”

“Of course not, go right ahead,” says I.

Big mistake. Of course he turns on a spook show. (What was I thinking?) Enter three very serious-looking thirty-somethings; self-proclaimed “investigators” of the existence of the supernatural: stars of the new show with the brilliantly creative title, Ghost Adventures.

Digression: Does anyone else find it amusing (and, in my case, tiring) that many of these shows feature apparent “skeptics” of the paranormal, purporting to go out and disprove the existence of ghosties, only to find that, “Ooh, they really DO exist!” ? Hey, let’s tell people we don’t believe in ghosts, then flip out when we feel that blast of cool air in the dungeon… *sigh* Truly. It’s like a Sci-Fi Channel original movie script — the type that would make Ed Wood proud. [And if you’ve ever seen a Sci-Fi Channel original movie, you’ll know exactly what I’m talking about.] Anyway…

For the next hour, I was treated to the audio of the show, since I cannot see the TV screen from the parlor. I’ll try to paraphrase the more entertaining bits:

We’re measuring for EMFs — that’s electromagnetic field — which some believe can detect the presence of paranormal entities.”

“Dude, I felt something.”

Right. So. How do you think the spooOoOOky episode ended? Well, in this case, it appears that our pesky poltergeist Mr. Boots caused quite a stir. It seems, according to a blog I read this morning about it, that one of the final shots was of the tour guide having a conversation with the lead investigator, Zak. There was, according to this blogger who watched the show, a noticeable “blur” around Zak, but the tour guide appeared totally clear. Creepy.

And, of course, nobody ever edits film footage or adds production effects. I mean, that would be an attempt to scare or fool people. TV producers would never do that… 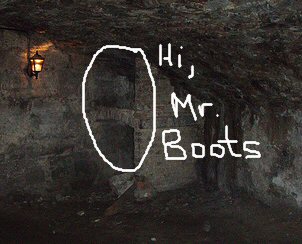 I’ve said before that if you watch this stuff purely to laugh at it, or to see great locales on TV, fabulous. But seriously, we all know people who get all buggy-eyed and whispery when they talk about these shows. I want to hug them; console them, make them hot cocoa. 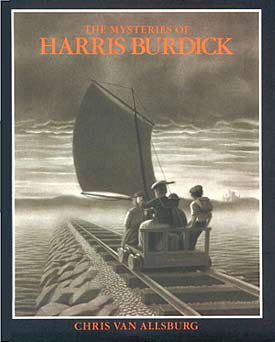 I have a better idea, though. Wanna feel a little creepy? Read The Mysteries of Harris Burdick. That’ll get your imagination going.

Have a great weekend, my fiends.