I need to design an award for this. I call it Boot to the Head. It refers to things that are so cosmically dumb, I can’t think of any other response than to kick the people responsible for them. 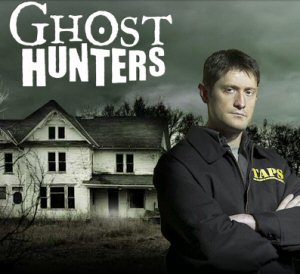 Uh-oh. Somebody got a chill in the basement. Call in the Sci-Fi Channel Ghost Hunters or the frightful folks of the Travel Channel’s Most Haunted. The night vision cameras make things look spooky, with people’s eyes all glowing & stuff. And the script is riveting: “Oh, my God!” and “%$(&^%!!” and “the energy in this room is very angry…”

My personal fave is when they record things. They gather around the laptop and exclaim, “It sounds like he’s saying ‘yes!‘” *GASP *

You know…if you’re going to have a ghostie show, then show some friggin’ ghosties. Each episode ends like it begins: the mystery continues.

The Thriller defends the programs (which he watches regularly) by saying, “These people often come in to disprove claims.” Well, boys & girls, you are batting 1.000 so far. 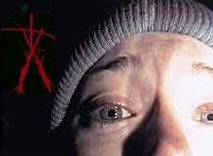 To me, all these “horreality” shows point to a singular inspiration: The Blair Witch Project. Has that cow been milked dry or what? But the little home-movie-turned-blockbuster did bear out what old-timers in filmmaking (and people like M. Night Shyamalan) have always known: The power of suggestion can be frightening.

Blair Witch used no CG, no whirlygig special effects. So what did the deed? What scared folks to death in an age when 10-year-olds watch movies that realistically depict limbs being sawed off? It was the unknown; the monster in the closet that you know is there, but what never shows its face. The pure terror of a group of kids supposedly “ghost hunting” brought everyone’s closet monsters to life. “A-haaaa,” said the movie and TV producers. Scary reality programming = truckloads of cash. And the copycats began, eventually resulting in gems like Most Haunted.

The point is, this stuff is treated with almost a religious reverence; a macabre sense of wonderment. Like it’s all real, and we’re just along for the ride, when in fact, none of it has *ever* been caught on film to the exclusion of all doubt by researchers, or in any way scientifically proven. If you watch these ghostie shows for their entertainment value, then cool. If you watch because you expect something to be “revealed,” then you gots a long, long wait.

James Randi, a magician and paranormal skeptic of considerable renown, has offered a cash reward every single day since 1964 to anyone who could prove the existence of paranormal activity or gifts. This amount has grown from $1,000 in 1964 to one million dollars today. No one has ever done it, even though over a thousand people have applied (and are still applying) to win it.

I know, I know…the same could be said about the existence of God. But the God folks don’t claim to be “scientists,” using all manner of infrared meters and temperature sensors to monitor what may not even respond in the least to those instruments. If you want to say it exists for scientific purposes, then put up or shut up.

I personally wish they’d all select B.

PS – Here’s a clip of a docu about the time when James Randi outed Uri Geller back in the 70s. This is footage of his appearance on The Tonight Show when Geller meets his match. Uncomfortable, to say the least…