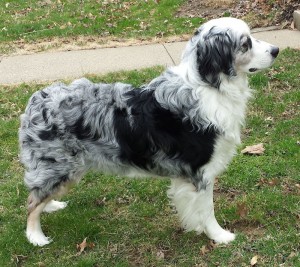 Remington: ever watchful for the next thing that’s going to frighten him.

If you live with a fearful dog, you know that life is not normal, or at least what other dog owners might consider normal. Visits from family and friends are adventures in abject terror. There’s no showing off your incredibly intelligent, good-natured, pretty pup to adoring friends and family who want nothing more than to get to know him. There are no tricks performed, because it’s difficult to get him to demonstrate “shake,” “lie down” or “Bang!” (play dead) when he’s hiding where he feels most secure: in the Thriller’s office downstairs, behind the couch, and under my desk or the coffee table.

I should say at this point that we have indeed made progress with Remy over the last eight months. Negligible progress, but progress all the same. Bob, Seamus and Helen have come over to help us with the “stranger danger” issue, all with encouraging degrees of success. Still, we know the mountain is high, and truthfully, we may never reach the summit. According to the vast amount of research we’ve done through buying several books, watching countless training videos, consulting dozens of websites, having him evaluated by someone who specializes in dog behavior, and purchasing hundreds of dollars worth of training products, it is possible he will always be this way. We are crazy about him regardless, but it isn’t easy sometimes.

This morning was not easy.

While Remy loves the park (both the dog park and the public park near our home), he is completely terrified of walking on the sidewalk. To go to the city park, located under a half mile away, we must transport him by car.

On the advice of popular dog trainer Zack George, I decided to introduce Remy to sidewalk training by desensitization: putting him in an uncomfortable situation for small bits of time, until he no longer fears it. This was to be done by leashing him and taking him to sit in the front yard, near the sidewalk. Sitting calmly for a few seconds earns him a piece of jerky, his favorite treat. After sitting for a few moments, walking a few feet of sidewalk is introduced, and so on, until more distance is added to the walk. The goal is to desensitize him to the sidewalk and all its accompanying distractions and noises.

I took Remy out on his park leash, and sat him down at the end of the front walk. So far, so good. I treated and praised him, and repeated the action four times. Then, I started towards our driveway — a total distance of about 15 feet. That’s when he went berserk.

He began pulling and running, darting (crouched low with his tail plastered down) every which way at random, circling me so I had to jump in order to avoid being tangled up and tripped — just trying to escape. He appeared to forget where the front door was; he pulled me so hard the opposite way (away from the house), that with all my might I could not stop to bring him to a sit (incredible how much power a 55-lb. animal can generate). He didn’t care that he was at this point gasping and choking, or that I was trying, in my calmest voice, to bring him back to me, or that he could smell the jerky in the pouch hanging from my belt. I had to lean away from him and pull as hard as I could, because he was beginning to drag me towards the street. This beautiful, smart dog had completely lost his mind.

With only overstretched biceps and a small cut on my finger reopened as damage, I finally got him back to the front steps. Once he recognized the door, he made a beeline for it. Inside, I unhooked him and he ran for the space under my desk like he’d been shot out of a cannon. I sat down on the floor next to him, cradled his head in my hands, and broke down in tears.

By the time the Thriller came home from his doctor appointment, both Remy and I had calmed down, but when I tried to tell him what happened, I started bawling again. As is his pattern, he began to devise a solution to the problem. Using a special leash we bought a couple months ago that’s designed to offer comfort to anxious dogs, he tried the experiment again, walking Remy on the sidewalk just in front of the house. A couple of times, he began to really pull. At that point, the harness’s “squeezing” compression motion kicked in, and it slowed him down long enough for him to respond to a “sit” command and have a piece of jerky. He repeated this about nine or ten times in front of the house, then brought Remy in. He made the same dash for my desk, but he didn’t seem as distressed as before. In fact, he unwound from his curled-up, defensive position and had a peaceful nap.

I know that patience is key, and overall, we try to exercise that virtue with Remy every day, because you can’t reverse the fallout of whatever happened to him in just a few short months — if ever. We will continue to make his healing a priority because we love him and he deserves it. I’d be lying if I said this wasn’t much more than we’d bargained for initially, but I have to believe Remy “found” us for a reason, and we owe it to him to give him our best every day, in spite of his fears and hangups.

Of course, that’s not to say that Mama won’t have the occasional meltdown herself.

I can so feel your frustration and pain, been there , still there. Gunner, our gorgeous 95 lb. Black Lab will be 7 years old this November. We adopted him from the local animal shelter as a puppy; we were told that he was 12 weeks old, the only one left out of 8 siblings, he was neutered when we got him. As always we take our rescues (4 to date) to our favorite Vet to get a complete physical. That is when we found out that Gunner was really only 6 weeks old, had been neutered way too damn… Read more »

Awww I love both of your stories Linda and David. Not that they are necessarily nice stories to read. But in this day and age where there are so many horrific things being done to animals all over the world your stories are full of love and a desire to make the life of one special animal better.

Hang in there Linda, your and Michael’s patience is going to be tried over and over. Keep crying and keep hugging and kissing Remy. He feels it even if he can’t necessarily show you that he knows you love him. <3

Aww. I feel so bad. Ya know, I believe all humans and animals have *some* sort of disability. It could be emotional, physical or both. I believe that God sent Remy to you and Thriller. He’s in the right family. I know this first hand! We love our animals just like our children. Sometimes a person can get so frustrated and hurt because we feel there is nothing more we can do to help them. That’s another reason God sent Remy to you guys. He knows you both take challenges head-on, you have so much love to give and He… Read more »

Poor baby – both Remy and Mama. Another family might have returned him to the shelter by now – kudos to you and the Thriller for sticking with him and continuing to shower him with love! I’m still struggling with my feral kitty, who still has her days, despite pheromone collars and diffusers and etc for going on 7 months now. Still refuses to cuddle, hides under the bed at times and hisses at other times. Why is it so hard to convince them that we love them and would never intentionally hurt them? I sent you a link to… Read more »

PS to PK — I did try the calming pills on both Remy and Oliver (when he was visiting). I couldn’t really tell if it was doing anything or not. It was chamomile and L-tryptophan; is that what you have?

Have I mentioned lately how awesome you guys are? Have I told you lately that I heart you? Well darlin’…