Well, there are probably some girls in there, too, but that would have ruined my cute alliteration. 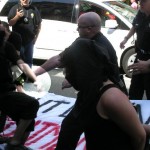 I read an article in the Canadian National Post last week about the alarming increase in the use of Tasers by the Royal Canadian Mounted Police. As the RCMP’s use of Tasers (“stun guns” that deliver a debilitating electrical charge that renders a suspect helpless and in temporary pain) rose a surprising 45% in 2007, critics pointed out that while giving a cop a Taser was initially a good idea, designed to protect citizens and police alike, it has “gradually become a tool to elicit quick compliance with police instructions, and sometimes just an easy means of silencing backtalk.”

<<<Hmmmm. Silencing backtalk. What’s wrong with that? *stroking beard* Kid talks back…give him the volts. I see nothing inappropriate here.>>>

Just this morning I caught this from Reuters: Mounties say they will curb Taser use. The subtitle said, “officers have been zapping suspects needlessly.” As you do. At any rate, it seems the RCMP got the message.

Hey, remember the “Don’t tase me, Bro!” video from last fall? That was intense (although the guy was a wackjob). I mean, the things are dangerous, right? But apparently, it’s legal in the US for citizens to own them. Can you say, “askin’ for it?” Who did this? They need a boot to the head. It’s like giving kids matches and saying, “Now don’t go burning yourselves or setting things on fire.” And check this: 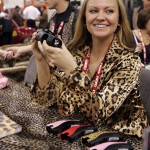 Taser flavors! Only in the USA, people…

Leopard skin on a weapon. What next?

I don’t want to get into the whole gun control/right-to-bear-arms debate. I just wonder what’s going to happen now that everyone (with a thorough background check, of course) is allowed to buy these things. I suppose it could be said that you could do the same thing (hurt people) with an egg beater, but come on. There are people who should simply *not* be allowed to play with Tasers. And most of them would pass the “background check” with flying colors. 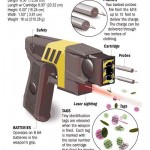 And don’t expect the Taser to just lie there, unimproved; the thing that just goes bzzzt-bzzzt. They’re already making these things more sophisticated. Pictured is the M18L model. Sure, it has cool stuff like identifying markers, imprinted with the serial number, which are discharged when the weapon is fired. But it also has…what?? Barbed probes??

Chile, don’t expect ANYONE to behave with that thang.