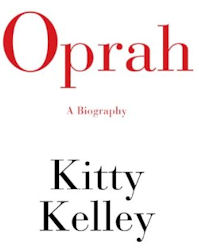 Kitty Kelley has written another tell-all biography. This time, the lucky winner is Oprah Winfrey. Kelley has also written about the British royal family, Jackie Onassis, Nancy Reagan and others over the years, and according to this suprisingly well-documented entry at Wikipedia, has yet to be successfully nailed for libel. Her most famous unauthorized biography — His Way: the Unauthorized Biography of Frank Sinatra — prompted the Chairman to slap her with a $2M lawsuit (which he later withdrew). I read the book ten years ago, and I must say that I’m certain it was infuriating to have someone say those things about oneself and not be able to do anything about it. Where does reporting stop and slander begin?

Regardless, his lawsuit just skyrocketed the book to the top of the New York Times Bestseller List, so there went that effort. Oprah’s people are probably kicking the cat right now too, since the tattlefest debuted at the top of the Times list.

I must buy it.

Interesting quote from Richard Roeper in his op-ed in the Lake County News-Sun (formerly the Waukegan News-Sun — remember, Mavis??):

Oprah isn’t offering comment on any of the claims Kelley makes in the book — but wouldn’t it be awesome if she booked Kelley as a guest? It would make the James Frey beatdown look like a love-fest.

Happy Tubesday. It’s almost the middle of the week, yippity.