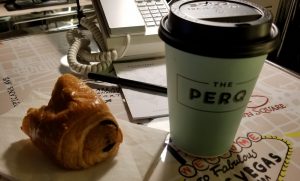 First things first: I arrived safely in this cute little oasis in the middle of the desert, where it’s only 93 degrees at 6:30 a.m. But my room at the SLS (the former Sahara, and from what I was told, will be going back to Sahara after a huge renovation) is nice and cool, and the coffee’s hot and the chocolate croissant was tasty.

But let me tell you about the “getting here” part.

I chose Spirit Airlines because:

And, as I discovered last night, every other weirdo like me in the universe also chose Spirit Airlines. To wit:

OK, so the trip was weird, but once I got inside the SLS, everything was great. Quick check-in, nice people, fun free upgrade, and a good night’s sleep.

Now I need to get out the door for today’s little adventure in the 106-degree coolness. I’ll report back tonight! Have fun, and stay outta the heat.

oh sis you know you get what ya pay for! lol have a great time’

Yeah I know, sis haha — next time I fly overseas, you bet I will upgrade!

Got this one, but leave a reply was different ~ hope your day is better than the flight ~ sadly there is little consideration for passenger needs when designing/scheduling flights and even less consideration from other passengers ~ that is the way of the world ~ hope you enjoy the shows and the glitz and glitter ReplyRat Fink Reply:July 26th, 2019 at 9:01 amI haven’t been keeping up on all the WordPress plugin updates — I don’t see anything different on my end, but that could be because I’m logged in as admin? I dunno. I hope to get Mailpoet… Read more »

Ya know, I think there’s something about traveling alone. You seem to attract the weirdos and crazies and get the worst service! I experienced that a LOT when I traveled alone from CA to MI. But coolness about the hotel, what kind of upgrade????? It’s almost as hot here as it is there, freakishly unbelievable! But so far we are OK, kitties too. Have a great time!!!! ReplyRat Fink Reply:July 26th, 2019 at 9:02 amWell you know we likely attract the crazies because it’s in our DNA. Remember the Uber driver in Salzburg? hahahaha They didn’t have the king room… Read more »

You really got snake bit on that flight! I bet “Love” was worth it, though!

Sis, “LOVE” was worth every item on my complaint list!!!! WOW